BREAKING: Thousands of Armed U.S. Troops Will Be Deployed to the Border by Friday, Here's What They'll Be Doing 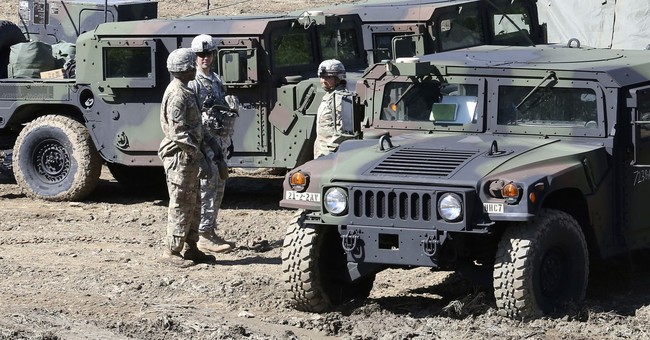 Officials from the Department of Homeland Security and Department of Defense announced Monday 5200 additional active duty U.S. troops will be deployed to the southern border with Mexico by Friday. Eight-hundred soldiers are on their way to Texas now.

“They are in fact deploying with weapons," U.S. Northern Command Air Force General Terrence O'Shaughnessy said during a press conference. "I think the President has made it clear that border security is national security."

Troops are being sent to bolster border security in Arizona, New Mexico and Texas as at least three caravans from Central America make their way through Mexico and toward the United States. The caravans pose a special threat due to their size, which range from 3,000 people to more than 10,000. According to U.S. Customs and Border Protection Commissioner Kevin McAleenan, at least one caravan near Guatamala, Mexico has used violent tactics to breach a number of international borders.

"Due to the large size of the potential caravans that may arrive at the border, the Department of Homeland Security has further requested the support of the Department of Defense," McAleenan said. "We will not allow a large group to enter the U.S. unlawfully."

.@CBP_McAleenan: “[@CBP] will not allow a large group to enter the U.S. unlawfully.” https://t.co/IpeXcNXUEk pic.twitter.com/DkZ3s1ZNSu

Troops will be used to build fencing, provide medical units, harden points of entry and address key gaps in points of entry. Air and ground transportation will be provided to move agents and equipment. This support requires military planning teams and heavy equipment, including Black Hawk helicopters and fixed wing aircraft.

Gen. Terrence O’Shaughnessy: “We'll reinforce along priority points of entry so as to enhance @CBP’s ability to harden and secure the border.” https://t.co/IpeXcNXUEk pic.twitter.com/FTJBUUYdXc

One-thousand additional Customs and Border Protection officers and agents are also being deployed to handle operations.