DHS: We Can Confirm There Are Criminals, Gang Members in the Illegal Caravan 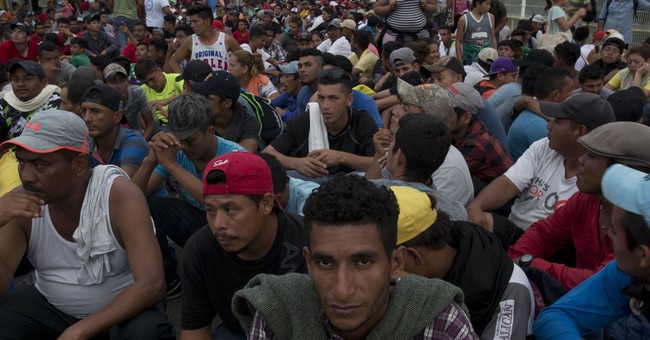 The Department of Homeland Security has confirmed there are in fact criminals and dangerous gang members traveling inside the illegal caravan headed to north to the U.S. southern border. In addition, they are confirming President Trump's claims "middle easterners" and citizens of countries outside of North and South America, are also in the caravan.

.@DHSgov can confirm that there are individuals within the caravan who are gang members or have significant criminal histories.

Citizens of countries outside Central America, including countries in the Middle East, Africa, South Asia, and elsewhere are currently traveling through Mexico toward the U.S.

Stopping the caravan is not just about national security or preventing crime, it is also about national sovereignty and the rule of law. Those who seek to come to America must do so the right and legal way.

During an interview with Fox News Tuesday, a Honduran man traveling with the caravan confirmed criminals are involved.

"Criminals is everywhere. Okay. There's criminals in here. I mean, there is. It's just not that many," Nixon Hernandez said. "It's good people trying to get through Mexico and get to the United States. That doesn't mean everybody's a criminal."

White House Press Secretary Sarah Sanders slammed Democrats over the issue and again called for their cooperation to end the crisis.

Department of Homeland Security says people from the Middle East, Africa, South Asia and elsewhere are currently traveling through Mexico toward the U.S...Needless to say this wouldn’t be happening if Democrats for once did their jobs and joined Republicans to fully fund the wall https://t.co/tGYV3AJaLu

The Democrats’ open border policy is an open invitation to the caravan. Thank God we have a President fighting for the rule of law and willing to stand up to the liberal mob trying to unleash chaos across our country