Feinstein Won't Let It Go: Of Course I'd Reopen the Kavanaugh Investigation If We Win a Majority 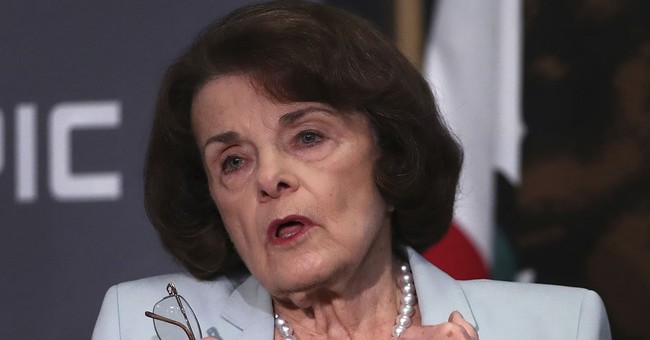 Senate Judiciary Committee Ranking Member Dianne Feinstein is still obsessing over Supreme Court Justice Brett Kavanaugh and declared this week if Democrats win a majority, she'd be happy to reopen an investigation against him.

“I’d be in favor of opening an investigation into the allegations,” Feinstein, the ranking minority member of the Senate Judiciary Committee, said during a debate in San Francisco with her challenger, state Sen. Kevin de León. A fellow Democrat, de León emerged from California’s hectic jungle primary system to challenge one of the Senate’s longest tenured members for her seat.

Kavanaugh was cleared of wrongdoing on bogus allegations after an extensive Senate investigation and thorough vetting by the FBI.

While Feinstein clearly believes continuing her assault on Kavanaugh will help her win reelection in far-left California, the issue is hurting Democrats nationally by galvanizing Republican voters. From Bloomberg:

Senate Majority Leader Mitch McConnell said the fight over Brett Kavanaugh’s Supreme Court confirmation is giving GOP candidates a well-timed "adrenaline shot" for the rest of the midterm election campaign, but he’s taking nothing for granted.