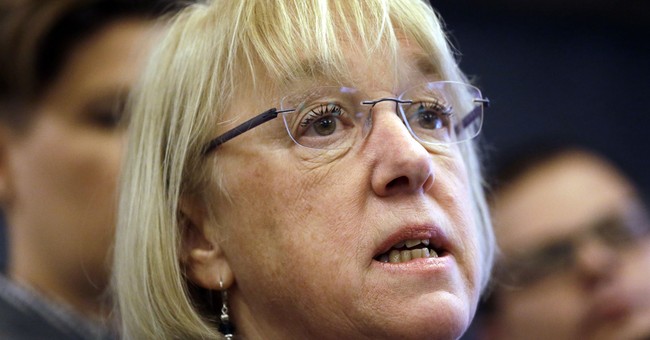 Democrats are continuing to panic over Supreme Court Justice Anthony Kennedy's retirement and his inevitable replacement being chosen by President Trump. Leftist lawmakers know they don't have the votes to stop a nominee on their own, thanks to former Majority Leader Harry Reid, so they're begging Republicans to join the resistance.

"I want to talk to you about what we all can do to make it clear how unacceptable an extreme, ideological Supreme Court nominee would be and push Senate Republicans to join Democrats in rejecting this kind of selection from President Trump," Democrat Patty Murray said in a video produced by Senate Democrats.

“The more you make your voice heard, the harder it will be for Senate Republicans to support a justice who will take our country backward.” -Sen. @PattyMurray in the Weekly Democratic Address pic.twitter.com/Hwtt3yjQyh

But the endless arguments about Trump's "extremist" nominee, who hasn't been named yet, don't stop with Patty Murray.

During an interview with ABC News over the weekend, Democrat Senator Richard Blumenthal accused President Trump of being a "puppet" for allowing the conservative organizations to provide him with a list of qualified Supreme Court candidates. For the record, President Obama consulted with liberal groups during his presidency before nominating Justices Elana Kagan and Sonia Sotomayor.

Sen. Richard Blumenthal on Pres. Trump's upcoming SCOTUS nomination: "The president's outsourced his decision to The Federalist Society and the Heritage Foundation...I've never seen a president of the United States in effect, make himself a puppet of outside groups" #ThisWeek pic.twitter.com/4LsXkq6GzX

President Trump told reporters Sunday he hasn't made a final decision about his choice, but would know before noon on Monday.

"We are close to making a decision. it's well let's just say it's the four people. Every one you can't go wrong," Trump said.

The president will make the announcement about his pick at 9 p.m. et from the White House Monday night.

Democrats currently hold 49 seats in the Senate, while Republicans have 51.