Pompeo: North Korea Must Denuclearize and They're on a Tight Timeline to Get It Done 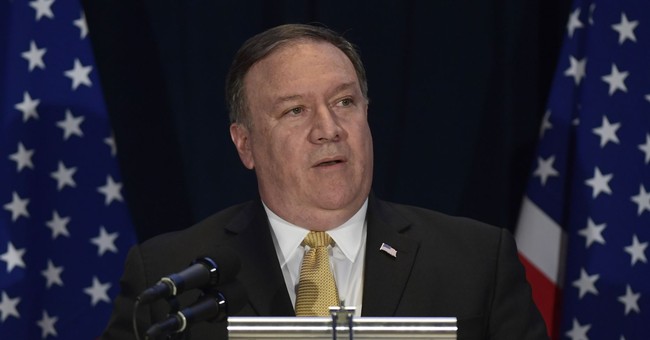 Fresh off of President Trump's Singapore summit with North Korean dictator Kim Jong Un, Secretary of State Mike Pompeo is already laying down a timeline for when the regime must denuclearize.

During a debriefing meeting in Seoul with South Korean officials about the summit, Pompeo reportedly outlined a two-and-a-half year long timeline for "major disarmament."

Speaking to a small group of reporters and asked if he would like to accomplish major nuclear disarmament within Trump’s current term, which ends on Jan. 20, 2021, Pompeo replied:

"Oh yes, most definitively. Absolutely ... you used the term major, major disarmament, something like that? We're hopeful that we can achieve that in the two and a half years."

At the conclusion of the Singapore summit, Trump and Kim signed an agreement to move forward with a new  U.S.-North Korea relationship, in addition to denuclearization and returning the remains of U.S. soliders killed or held as prisoners during the Korean War.

Pompeo plans to fully enforce the terms and explained in Singapore that the United States has the resources to rapidly denuclearize North Korea.

"For over three months, an interagency working group of over 100 experts across government has met multiple times per week to address technical and logistical issues associated with dismantling North Korea’s weapons programs.  They include experts from the military charged with dismantling nuclear weapons; the Department of Energy, including PhDs and experts from DOE labs; and officials from the intelligence community covering North Korea.  Those same experts also cover North Korea’s nuclear, chemical, biological, and missile programs," Pompeo said during a press conference.

Recommended
US Marshals: We're Looking to See If the January 6 Defendants Are Being Deliberately Mistreated
Matt Vespa

"These experts include dozens of PhDs who have expertise in nuclear weapons, the fuel cycle, missiles, chemical and biological weapons.  They have advanced degrees in nuclear engineering, physics, chemistry, aerospace, biology, and other relevant fields," he continued. "On the ground in Singapore, we have a team that includes the President’s senior most expert in weapons of mass destruction who can cover any technical needs that the meetings may present."

Preparing for future work ahead to deliver on the commitments made at the #singaporesummit @StateDept pic.twitter.com/lchhB0Qq7h