Trump Rallies (and Surprises) Navy Grads: You Are Now Part of the Mightiest Fighting Force in the World 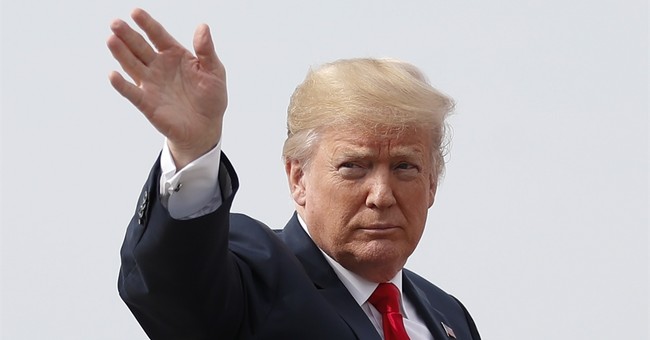 President Trump traveled from the White House to Annapolis, Maryland Friday morning to give the commenement address for the 2018 U.S. Naval Academy graduating class.

"You are now leaders in the most powerful and righteous force on the face of the planet: the United States military," President Trump said to a stadium filled with 30,000 people. "Each of you will make your own mark on the Navy, the Marine Corps, the military, and the history of our great nation...There is no hill our Marines our can’t take and there is no stronghold the SEALs can’t breach. There is no sea the Navy can’t brave."

"Together you are the tip of the spear, the edge of the blade and the front of the shield defending and protecting our great country," he continued. "America is the greatest fighting force for peace, justice, and freedom in the history of the world."

The president joked about the football rivalry between Navy and Army, then proceeded to ask if they were "sick of winning yet." He also informed the cadets that hundreds of new ships are on their way and said the days of depleted military funding are over.

"No money for the military? Those days are over," he said. “We know that the best way to prevent war is to be fully prepared for war.”

Near the end of his remarks, the president said he was told he would stay and shake hands with the top 100 graduates. The number was limited for the sake of time. He turned to the crowd and asked if he should stay to shake hands with all of the cadets, which totaled more than 1000.

After chants of "Stay! Stay! Stay!" he made the decision to stay and greet every cadet receiving a diploma.

“Strive for excellence, live for adventure, think big, dream bigger, push further, sail faster, fly higher, and never, ever stop reaching for greatness,” he concluded. “As long as we are united with the same mission, the same purpose, the same patriotic heart, we will win because we are one people, one family, and one glorious nation under God.”