Pompeo Warns Iran: This is Just The Beginning 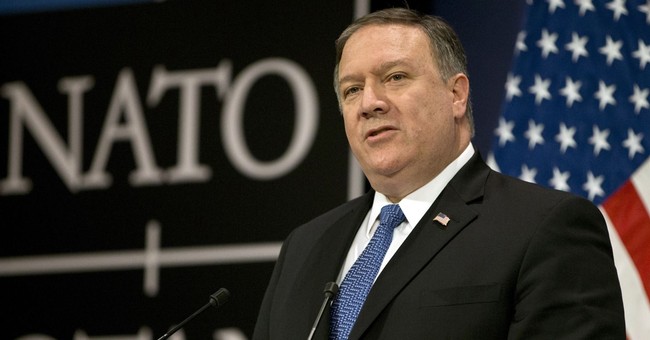 Speaking at the Heritage Foundation Monday morning, Secretary of State Mike Pompeo laid out the United States' new Iran policy in wake of President Trump's recent decision not to re-certify the nuclear agreement.

In a three point plan, Pompeo outlined the terms of a new agreement should Iran be willing to come back to the negotiating table. Iran must end its sponsorship of terrorism around the world, including Hezbollah, release Americans being held hostage, allow inspection compliance at all military sites in the country and more.

"We are working to bring each American missing, wrongfully detained in Iran," he said.

NEW: Pompeo, in speech at @Heritage, lays out 12 far-reaching demands for any new nuclear deal with Iran pic.twitter.com/uB20cDYaMW

In recent weeks the Treasury Department, in partnership with allies in the Middle East, have implemented new economic sanctions on the Iranian regime. According to Pompeo, that was just the beginning.

"Leaders in Tehran will have no doubt about out seriousness," Pompeo said, adding the regime will see unprecedented economic pressure through the "strongest sanctions in history."

Iran will be forced to make a choice: economic security at home or continuing to fight abroad through terrorism and proxy wars.

During his 25-minutes long remarks, Pompeo said the Trump administration isn't looking for another temporary deal with the Iranian regime, but instead a treaty passed by Congress that will endure long after President Trump leaves office.

"A new deal is not the objective. The goal is to protect the American people," Pompeo said. "We will not repeat the mistakes of the past administrations."

Laying out new requirements for a new deal, Pompeo detailed a long list of bad behavior by the regime that was tolerated under the Obama administration, including Iran's flooding Syria with fighters to prop up the Assad regime and to attack Israel.

"The bet that the JCPOA [Iran nuclear agreement] would increase stability was a bad one," Pompeo said, adding the deal has had negative consequences for everyone living in the Middle East. "It is clear the JCPOA did not end Iran's ambitions for a nuclear weapon."

"Iran continues to be the world's leading sponsor of terror and a sanctuary for Al Qaeda," he continued.

The United States plans to block Iran's terrorism, ballistic missile program and any path to a nuclear weapon.

"Iran will no longer have carte blanche to dominate the Middle East," he said. "Iran's nuclear aspirations cannot be separated from the overall security picture...Iran must declare the full account of its prior nuclear program and abandon it."

Finally, Pompeo said the United States will tirelessly advocate for the Iranian people, who have been protesting in the streets against the regime for months.

"The protests show the Iranian people are deeply frustrated," Pompeo said. "Many are angry at the regime for keeping for itself what it steals form the people."

"Today we ask the Iranian people, is this what you want your country to be known for?" he continued. "The United States believes that you deserve better."

Pompeo called on European allies to demand Iran act more responsibly and said if Iran complies with the U.S. list of requirements, all economic sanctions will lifted and normal diplomatic relations will be restored.