Here's a List of Major U.S. Allies Celebrating an End to the Iran Nuclear Deal 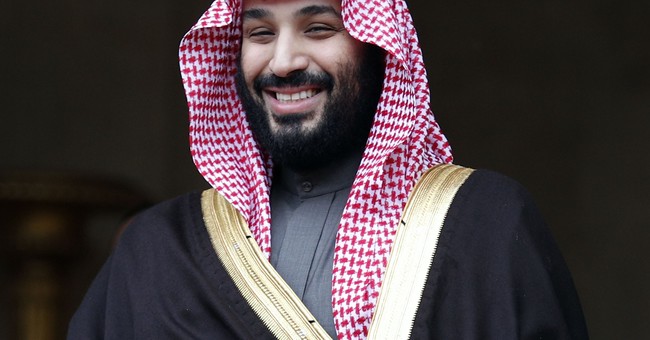 In the aftermath of President Trump announcing earlier this week the United States is leaving the Iran nuclear deal, Obama administration officials, Democrats and their friends in the media have dishonestly proclaimed "all" of America's allies are upset with the decision.

France, Germany, and the UK regret the U.S. decision to leave the JCPOA. The nuclear non-proliferation regime is at stake.

Trump ignored all of our allies and shredded the #irandeal. Find out what happens next with @brhodes - https://t.co/NkLTviB9IJ

While the French, Brits and Germans have expressed disapproval of Trump's decision, U.S. allies in the Middle East are practically jumping for joy. Some are even praising God.

"As long as Iran has breached the status quo in the region and has evacuated its troops and missiles, any state in the region, including Israel, is entitled to defend itself by destroying the sources of danger."

"The Iranian nuclear agreement was born thin and lived paralyzed. It was an imperfect agreement that unleashed the hands of Iran to tamper with the security and stability of the region. And today he fell and thank God."

"Iran says the United States is denouncing the vows! We have many treaties with the United States dating back long decades and none. We saw the reversal of vows and lies and conspiracy from the untrusting Iranian regime."

"A great leadership stance by President Donald Trump in favor of the security and stability of the world by withdrawing from Iran's nuclear agreement and tightening the sanctions on the Iranian regime, and Bahrain supports and welcomes."

GREAT STATEMENT by #Bahrain Foreign Minister:
“As long as #Iran has renounced the situation in the region and armed countries with its forces & missiles, any country in the region, including #Israel, has the right to defend itself by destroying the sources of danger.” https://t.co/bRdFBz0bL0

Iran’s rhetoric & aggressive regional actions were the background to a flawed deal. The veneer of Tehran’s compliance contradicted its bellicose policies. President Trump’s decision is the correct one.

"The deal didn't push war further away. It actually brought it closer. The deal didn't reduce Iran's aggression, it dramatically increased it. We see this across the entire Middle East," Israeli Prime Minster Benjamin Netanyahu said Tuesday afternoon. "This is why Israel thinks that President Trump did a historic move and this is why Israel thanks President Trump for his courageous leadership, his commitment to confront the terrorist regime in Tehran and his commitment to ensure Iran never gs nuclear weapons. Not today, not in a decade, not ever."

Thank you President Trump for your bold decision and your commitment to prevent Iran from ever getting nuclear weapons. @POTUS pic.twitter.com/TeUNWarjnu

As I said before with regards to the deal, we are on auto pilot heading towards a mountain. Deal has fueled Iran’s malicious expansion driven by its extremist ideology. It provided Iran with a financial windfall that it used to further sectarian strife/chaos in the region.

Since deal was inked, instead of behaving like a responsible member of the int’l community, the regime doubled down on its support for terror, providing dangerous weapons (such as ballistic missiles) to terrorist proxies including the Houthis In Yemen to target civilians in KSA.

KSA always believed that the int’l community cannot address Iran's pursuit of WMD, without addressing the mass destruction Iran is inflecting on the region. Any future deal must address Iran’s ballistic missile program, and its increasing financial/military support for terrorism.

To say America has abandoned, ignored or upset all of its allies with the Iran decision is completely devoid of fact.