Trump: Newly Minted Secretary of State Mike Pompeo is a Patriot and Has My Trust 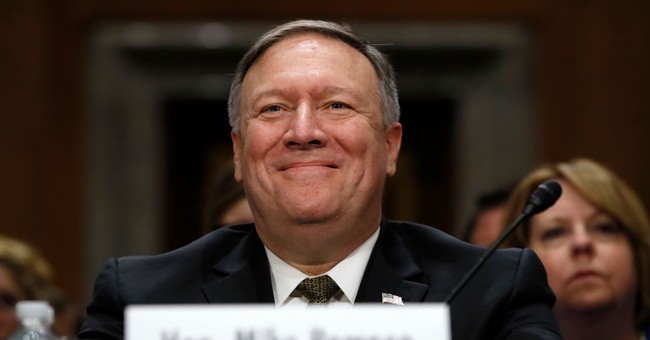 Thursday afternoon, former CIA Director Mike Pompeo officially became the 70 U.S. Secretary of State after being confirmed by the Senate in a 57-42 vote.

"I am pleased with the Senate’s confirmation of Mike Pompeo to serve as our country’s top diplomat. Having a patriot of Mike’s immense talent, energy, and intellect leading the Department of State will be an incredible asset for our country at this critical time in history," President Trump released in a statement. "He will always put the interests of America first. He has my trust. He has my support. Today, he has my congratulations on becoming America’s 70th Secretary of State."

Congratulations to Mike Pompeo on being confirmed the 70th Secretary of State! Mike brings years of public service and expertise to the job. @POTUS & I know that Mike Pompeo will serve our Nation w/ distinction and will do an outstanding job for the American people.

Pompeo was officially sworn in soon after voting ended.

Michael Richard Pompeo was just sworn in as the 70th Secretary of State from the West Conference Room at The Supreme Court of the United States by Associate Justice Samuel Anthony Alito, Jr. pic.twitter.com/RH95jrt8vk

President Trump has been blasting Democrats for days for continued obstruction of Pompeo's nomination.