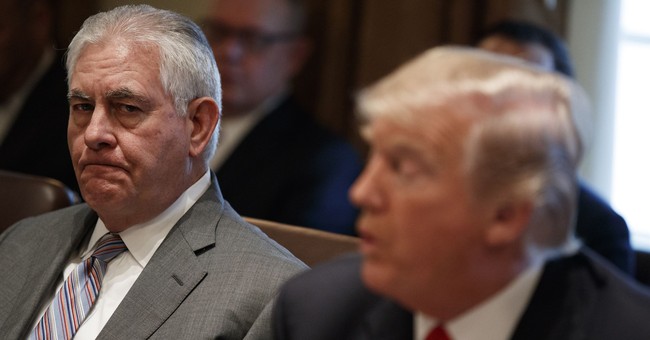 President Trump announced the firing of Secretary of State Rex Tillerson Tuesday morning but according to the State Department, Tillerson didn't see it coming and hasn't spoken directly to the President. From Fox News' Rich Edson.

State official says Tillerson has not spoken to POTUS and had every intent of staying.

State Dept Under Secretary Steve Goldstein to @RichEdsonDC:
- #Tillerson is unaware of the reason the president is replacing him.
- Had every intent of staying.
- Is proud of his national security accomplishments.

President Trump is saying the opposite.

"Rex and I have been talking about this for a long time. We got along quite well but we disagreed on things. When you look at the Iran deal, I think it's terrible and he thinks it's okay," Trump said. "We weren't really thinking the same. With Mike Pompeo we have a very similar thought process. I think it's going to go well. Rex is a very good man. I like Rex a lot. I really appreciate his commitment to service and I'll be speaking to Rex over a long period of time."

"I wish Rex Tillerson well," Trump continued. "I actually got along with Rex but really it was a different mindset."

When asked about whether he consulted Tillerson about accepting an invitation to meet with North Korea's Kim Jong, Trump said he didn't speak with him about the issue.

"I didn't discuss it very much with with him, honestly," Trump said leaving the White House Tuesday morning for California. "I made that decision by myself."