Texas School District Tells Students: If You Walk Out For a Political Protest, We'll Suspend You 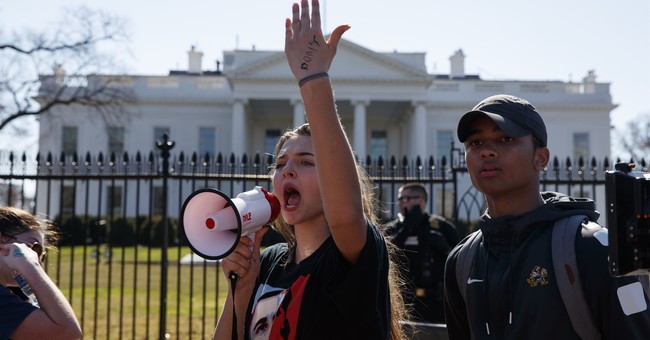 Thousands of high school students walked out of their classrooms today and took to the streets with demands for gun control. Democrats have poured hundreds-of-thousands of dollars into the organized effort and gun control groups like the Brady Campaign and Michael Bloomberg's Everytown are helping to lead the way.

But one school district in Texas is having none of it and is warning students about doing the same.

In a letter to students and parents Wednesday, Needville Independent School District Superintendent Curtis Rhodes promised three day suspensions for those who leave school for any kind of political protest.

"The Needville ISD is very sensitive to violence in schools including the recent incident in Florida. Anytime an individual deliberately chooses to harm others, we are sensitive and compassionate to those impacted. There is a "movement" attempting to stage walkouts/disruptions of the school through social media and/or other media outlets," Rhodes wrote on the Needville High School Facebook page. "Please be advised that the Needville ISD will not allow a student demonstration during school hours for any type of protest or awareness!! Should students choose to do so, they will be suspended from school for 3 days and face all the consequences that come along with an out of school suspension."

"Life is all about choices and every choice has a consequence whether it be positive or negative. We will discipline no matter if it is one, fifty, or five hundred students involved. All will be suspended for 3 days and parent notes will not alleviate the discipline," Rhodes continued. "A school is a place to learn and grow educationally, emotionally and morally. A disruption of the school will not be tolerated. Respect yourself, your fellow students and the Needville Independent School District and please understand that we are here for an education and not a political protest."

Meanwhile, an anti-Second Amendment march on Washington is being planned for next month.