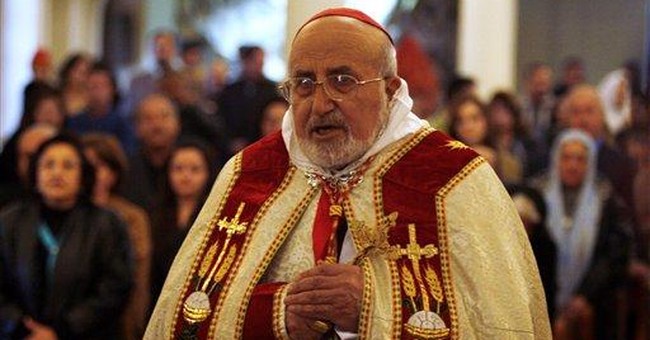 ISIS has been defeated on the ground in Iraq, according to Iraqi and U.S.. military officials. After years of barbarism and slaughter of Christians in the region, their reign of terror and genocide is over and a new hope resides in the streets.

In Baghdad Iraqi Christians are proudly displaying a 30-foot tall Christmas tree and passers by have been taking photos and selfies in front of it all weekend long.

Iraqi Christians have raised a 30-ft. tall Christmas tree in Baghdad to celebrate both the holiday and the expulsion of ISIS extremists by Iraq Security Forces. pic.twitter.com/e96oaR5neN

In Mosul, celebrations are back for the first time in years. More from The Media Line:

Today, while Christians throughout the region enter the holiday generally apprehensive about their place in a turbulent Middle East, the diverse Armenian, Assyrian, Chaldean and Syriac communities in northern Iraq have something special to celebrate.

Christmas trees have appeared in market places and Santa Claus has been sighted on the streets of Mosul.

“It might seem strange to hear that a female Santa Claus has appeared in this city,” said seventeen-year old Ghenwa Ghassan. “But I wanted to give the people here a simple gift — to bring Christmas to a place where it had been banished.”

Dressed as Santa, Ghassan distributed toys and school supplies to Christian and Muslim children in the rubble strewn streets of Old Mosul.

After three years of domination by ISIS, which included killing, abduction, and banishment of Christians from Mosul and the surrounding area, the return of Christmas marks a moment of hope that more people may be able to return along with the holiday.

“The young people spent the night decorating our town with lights just like we used to before ISIS came,” said Bernadette Al-Maslob, a fifty-nine year old archaeologist, in Karamlesh, eighteen miles southeast of Mosul.

You can read more about the return to Christmas in Iraq here.