President Trump Touches Down in Texas 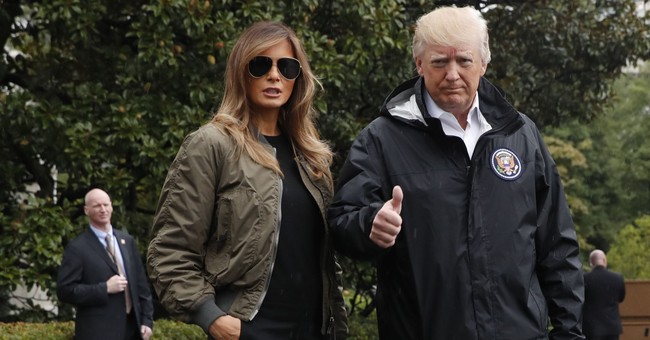 UPDATE: Here are the President's opening remarks at the first meeting of the day, which took place at Annaville Fire Department

President Donald Trump, accompanied by First Lady Melania, has officially touched down in Texas ahead of an afternoon of meetings with local officials and tours of numerous hurricane disaster areas. He will stop in Corpus Christi and Austin, avoiding the hardest hit areas of Houston where rescue efforts are ongoing.

"Due to the weather and all of the circumstances it's a little bit more fluid today than a normal travel day," White House Press Secretary Sarah Huckabee Sanders said aboard Air Force One Tuesday. "The president wants to be very cautious about making sure that any activity doesn't disrupt any of the recovery efforts that are still ongoing, which is the reason for the locations we are going here today."

.@GovAbbott briefs @POTUS and @FLOTUS on areas most affected by #HurricaneHarvy upon arrival at Fire Station 1. pic.twitter.com/nqbFURB0dH

"We can count on the President of the United States" @GovAbbott tells group gathered at Fire Station 1. #POTUSinTX pic.twitter.com/tDoTRTa7u7

.@GovAbbott: "We can count on the president of the United States and his staff for helping Texas." https://t.co/JZEqIyl0VO pic.twitter.com/t3OrwouvSA

.@POTUS and @FLOTUS have arrived in Corpus Christi, Texas, for briefings on Tropical Storm #Harvey. pic.twitter.com/rJQreOHl8F

"There will be a big group kinda briefing, local officials there in Corpus Christi and Senators Cruz and Cornyn are expected to join there and be with us through a bit of the day," Sanders said. "The first part of the trip and one of the main, primary reasons for secretaries Price, Secretary Carson and Administrator McMahon, each of their agencies will play a really big role particularly in the recovery efforts going forward and today they will be with their counterparts of the governor's cabinet, so that they can really come back and make sure that we are all in to offer federal assistance and lay the foundation for what we know is going to be a long recovery effort."

"Those are agencies that will have a pretty heavy lift in this process and so we want to make sure that they have the opportunity to meet face-to-face with, with not just the state, but also the local authorities," she continued.
"That's a big part of what today will be about, is the coordination between local, state and federal officials, that will lay the groundwork for the recovery efforts that are going to be going on for quite some time."

More than 30,000 people have been displaced in Houston with many more expected as the rain continues through Wednesday, possibly Thursday. The Houston Convention Center has been opened to house 9000 people so far. On Tuesday, Tropical Storm Harvey broke records after dumping 49 inches of rain over the past three days. Fifteen people have been killed, including a Houston police officer who drowned in his car on the way to work Monday.