Trump Tries Again: Republicans Are Wasting Time Because They Haven't Destroyed The Filibuster 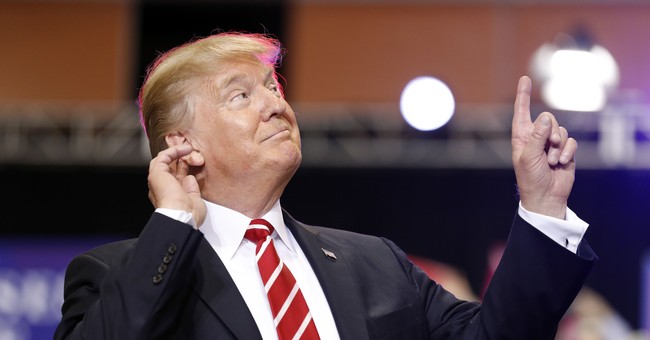 President Trump is once again urging Senate Republicans to get rid of the filibuster in order to push through his agenda, arguing Wednesday morning that they're wasting time by not doing so.

If Republican Senate doesn't get rid of the Filibuster Rule & go to a simple majority, which the Dems would do, they are just wasting time!

During a campaign style rally in Phoenix Tuesday night Trump berated Republicans, specifically Arizona Senators John McCain and Jeff Flake (although he did not call then out by name), for failing to pass Obamacare repeal. He also called on Mitch McConnell to get rid of the filibuster in order for Republicans to maximize their majority.

"We have to get rid of the filibuster rule. Right now, we need 60 votes and we have 52 Republicans. That means that eight Democrats are controlling all of this legislation. We have over 200 bills. And we have to speak to Mitch and we have to speak to everybody. And I want to tell you, we have some great, great Republican senators. We really do, and they fought like hell to get that thing approved," Trump said. "Now, even on healthcare, because of reconciliation, which, if you don't know, it doesn't matter. It's a trick. We needed 51 votes. But when you need 51, and you have 52, and we include the vice president, who always votes with us. He's the greatest. But you have no margin."

"But some of the best things in healthcare require 60 votes. So even when you say we're voting on healthcare, like across state lines, purchase across state lines. One of the most important things, I've been talking about it for two years during debates. It gives competition. Insurance companies come in, your prices go way down. Arizona is a disaster in terms of the price increase of your insurance, 116 percent interest," he continued. "You got to get rid of the filibuster rule. You've got to go to a majority. You've got to go to 51 votes, and if they don't do that they're -- they're just wasting time."

Trump has repeatedly called for the annihilation of the filibuster in the past, which has been met with opposite on both sides of the political aisle.