Trump Warns Criminal Aliens: We Will Find You, Arrest You, Deport You 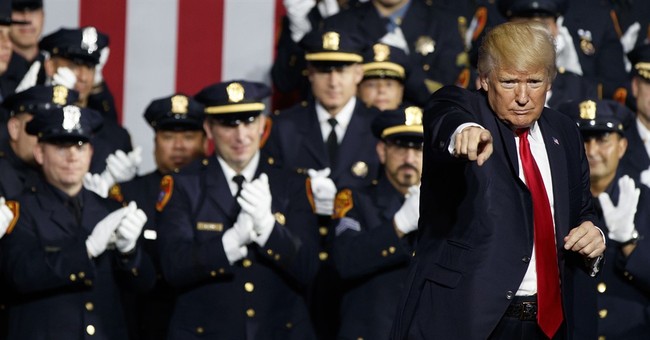 Speaking in Long Island, New York Friday afternoon President Donald Trump bolstered efforts by the Department of Justice to go after criminal illegal aliens. Specifically he focused on El Salvadorian street gang MS-13, which has been wreaking havoc on the region and in communities across America.

"The men and women of ICE are turning the tide in the battle against MS-13," Trump said. "We will find you. We will arrest you. We will jail you, and we will deport you."

"ICE officers recently conducted the largest crackdown on criminal gangs in the history of our country," he continued. "We're just getting started. We will restore law and order."

In Long Island a number of serious and violent crimes have been committed by MS-13 members, including the recent murder of a 19-year-old man with a hatchet.

Attorney General Jeff Sessions visited El Salvador this week, where hundreds of MS-13 members were charged with a number of crimes.

"They perpetrate violence—from assaults to homicides, using firearms, machetes, or blunt objects—to intimidate rival gangs, law enforcement, and the general public. They often target middle and high school students for recruitment. And they form tenuous alliances...and sometimes vicious rivalries...with other criminal groups, depending on their needs at the time," the FBI describes. "Members of Mara Salvatrucha, better known as MS-13, who are mostly Salvadoran nationals or first generation Salvadoran-Americans, but also Hondurans, Guatemalans, Mexicans, and other Central and South American immigrants. And according to our recent national threat assessment of this growing, mobile street gang, they could be operating in your community...now or in the near future."