Christians Under ISIS Siege in Egypt 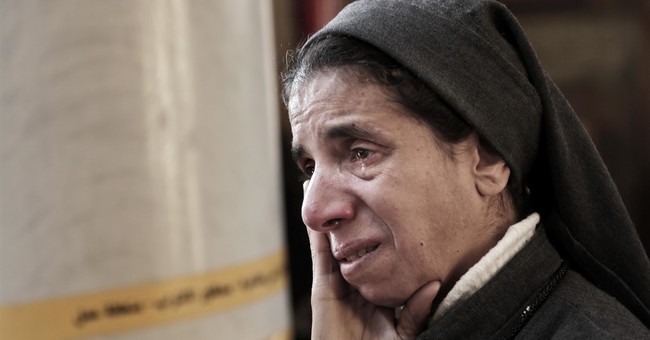 In 2016, Christians were the most persecuted religious group on the planet and the trend is continuing.

Suspected Islamic militants gunned down a Christian man inside his home in northern Sinai, officials and a priest said Friday, the latest in a string of sectarian killings there that has sent hundreds of Christians fleeing and raised accusations the government is failing to protect the community.

The militants stormed the home of Kamel Youssef, a plumber, on Thursday and shot him to death in front of his wife and children in the town of el-Arish, said two security officials and the priest.

According to Lisa Daftari at The Foreign Desk, militant groups sympathetic to ISIS have developed a kill list for Christians in the Sinai region.

In the past few days, several ‘kill lists’ have been posted anonymously by jihadists online, highlighting churches across Egypt, and in some cases, listing names of prominent Christians to target.

“Praise be to Allah.. we will post some of the churches and congregation sizes across Egypt,” the post begins, rallying pro-ISIS jihadis to target the larger churches for maximum impact.

The post instructs Muslims to “target the infidel Christians attacking their churches and those who protect them using weapons, improvised weapons, daggers and even stones.”


According to Open Doors USA, 215 million Christians around the world were persecuted in some way last week for simply practicing their faith. Last summer, the Obama administration officially declared ISIS is carrying out a genocide against Christians in the Middle East and North Africa.