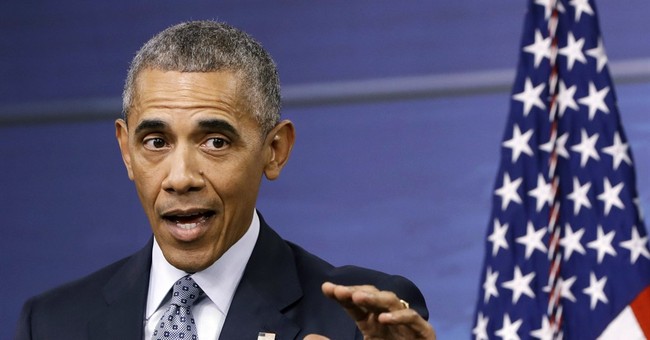 A special congressional joint task force has officially confirmed what has been suspected for months: The Obama administration through U.S Central Command scrubbed intelligence reports showing the rise of ISIS as a critical threat to the United States and the world. The reports were altered for political purposes to present a rosier, less threatening picture of the terror army to the American people. In other words, the administration wanted to prove ISIS was a "jayvee" team as President Obama claimed in September 2014.

According to a report released Tuesday by the task force, the scrubbing and changing of reports was done at senior levels, not by low level intelligence analysts.

"After months of investigation, this much is very clear: from the middle of 2014 to the middle of 2015, U.S. Central Command’s most senior intelligence leaders manipulated the command’s intelligence products to downplay the threat from ISIS in Iraq.  The result:  consumers of those intelligence products were provided a consistently ‘rosy’ view of U.S. operational success against ISIS.  That may well have resulted in putting American troops at risk as policymakers relied on this intelligence when formulating policy and allocating resources for the fight," Congressman Mike Pompeo, who served on the joint task force which investigated the matter, said in a statement Thursday. “The cultural breakdown in Central Command’s intelligence process resulted from an administration-wide understanding that bad news from Iraq and Syria was not welcomed.  Claims that ISIS was the ‘JV team’ and that al-Qaeda was ‘on the run’ were both a result—and a cause—of the politicization of intelligence at CENTCOM.  This intelligence manipulation provided space for both ISIS and al-Qaeda to grow and it put America at risk."

“Intelligence products always contain some level of uncertainty.  But during this period, nearly every error was in one direction:  downplaying the threat from radical Islamic terror consistent with the administration’s narrative that this threat was not significant.  I urge the Department of Defense Inspector General to hold accountable the intelligence leaders that failed our service members fighting our wars on the ground,” he continued.

"The  leadership  environment  within  CENTCOM  and  its  Intelligence  Directorate deteriorated  significantly  following  the 2013 departure  of Marine General James Mattis  and  his senior  intelligence  leaders. Survey  results  provided  to  the  Joint  Task  Force demonstrated  that dozens of analysts viewed the subsequent leadership environment as toxic, with 40% of analysts responding  that  they had  experienced  an  attempt  to  distort  or  suppress  intelligence  in  the  past year," the report states. "Analysts indicated that CENTOM Intelligence Directorate leadership  consistently “softened” intelligence  assessments to provide more uncertainty regarding possible outcomes. Analysts described the leadership as risk - averse and unwilling to accept uncertainty in intelligence analysis — which by its very nature deals in probabilities and contingencies rather than certainties. Survey results  also indicated that multiple  analysts felt that assessments were frequently edited to more positively reflect the situation on the ground."

The special task force issued a series of recommendations in the report, including restructuring the intelligence review process to prevent editing or altering of intelligence reports.