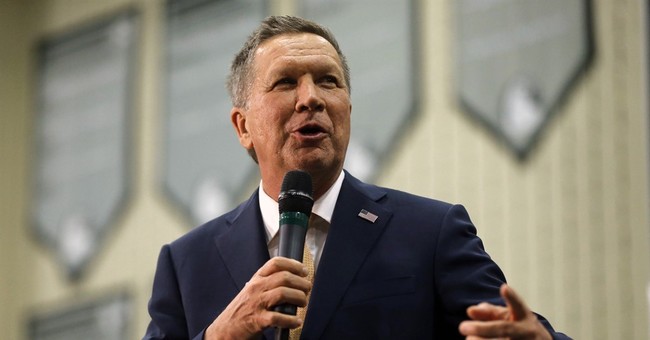 We're less than one week from the Wisconsin GOP primary and Ohio Governor John Kasich just landed an endorsement from the state's largest newspaper. From The Hill:

The Milwaukee Journal Sentinel’s editorial board, which noted that it usually doesn’t endorse, highlighted the Ohio governor’s response to last week’s terrorist attack in Brussels.

“Kasich had a smart, pragmatic answer. He is, in fact, the only thoughtful candidate with a fundamental belief in long-standing democratic principles who remains standing in the GOP primary field,” the board wrote.

“[T]he Republican presidential campaign this year demands a stand: We recommend John Kasich in the Wisconsin Republican primary on April 5,” the board continued.

From the Milwaukee Journal Sentinel editorial, which you can read in full here:

The former congressman and businessman offers Republicans a platform of conservative ideas centered on fiscal responsibility while he offers independents the promise that he will surround himself with expert advisers from various perspectives as he makes informed, independent decisions.

What impresses us most about Kasich is his independence. Unlike Gov. Scott Walker in Wisconsin and most other Republican governors, Kasich decided to take the additional Medicaid funding that came as part of the Affordable Care Act. The decision meant an infusion of $13 billion for Ohio, which was irresistible for a politician focused on fiscal discipline even in the face of Republican opposition in the Ohio legislature and criticism from conservatives nationally.

Most important, Kasich appears to be the only Republican left in the race who actually could govern if he does win. Trump is Trump — vacuous, unqualified and dangerously ignorant of foreign affairs. Cruz is brilliant but unable to escape the twin straitjackets of ideology and ambition. The author of the futile 16-day government shutdown in 2013 over Obamacare, he also conducted a 21-hour filibuster designed to do one thing: burnish the image of Ted Cruz with tea party conservatives. A team player, he is not.

Republicans and independents who value leadership, dignity, pragmatism and experience should vote for John Kasich next Tuesday.

Yesterday, Cruz picked up an endorsement from Wisconsin Governor Scott Walker, who of course also ran for president last year.