Biden Tries to Walk Back The Biden Rule, Fails 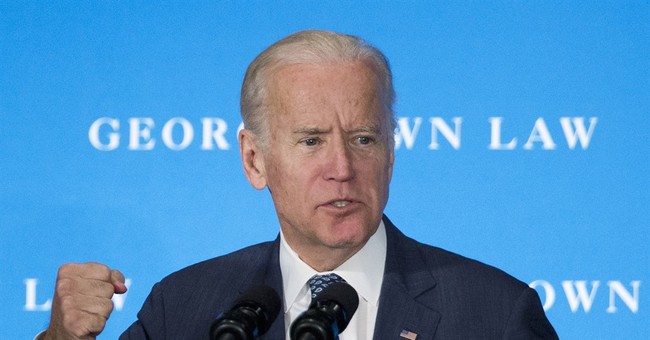 As Republicans continue to cite the Biden rule as evidence as to why they shouldn't give President Obama's Supreme Court Nominee Merrick Garland confirmation hearings or a vote on Capitol Hill, the White House is attempting to distance Vice President Joe Biden from the issue and his own words.

On Thursday, Biden dedicated an entire speech at Georgetown Law School to Garland's nomination and attempted to walk back comments he made in 1992 declaring SCOTUS nominees should not be confirmed in a presidential election year.

Vice President Joe Biden on Thursday tried to clear his name and tout his record on Supreme Court nominations, calling Republican branding of his past remarks on the subject "ridiculous" and casting himself as a longtime advocate of bipartisan compromise in filling seats on the high court.

In a speech at Georgetown Law School, Biden issued a broad warning that Republicans' election-year blockade of President Barack Obama's nominee "can lead to a genuine Constitutional crisis" and sought to distance himself from the strategy. He argued Republicans have distorted a 1992 speech in which he seemed to endorse the notion of blocking any Supreme Court nominee put forward in the throes of the election season.

"There is no Biden rule. It doesn't exist," Biden told professors and students. "There is only one rule I ever followed in the Judiciary Committee. That was the Constitution's clear rule of advice and consent."


The problem? The Biden rule actually does exist and Biden created it when he served as the Chairman of the Senate Judiciary Committee.

The Biden rule stands, even when a Democrat sits in the White House.