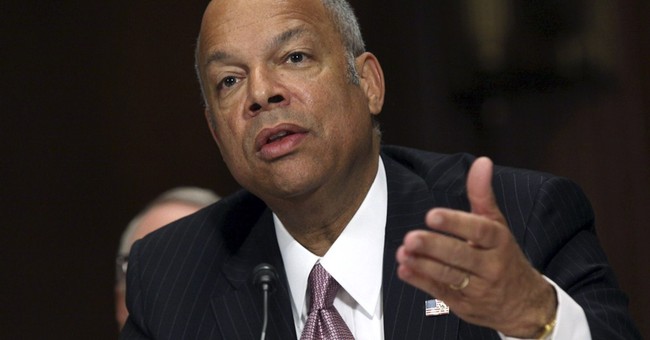 Since the killing of 32-year-old Kate Steinle in the sanctuary city of San Francisco earlier this year by a previously deported, seven-time felony illegal alien, sanctuary city policies have come under heavy scrutiny from the American public and Congress. Now, sanctuary cities have found another critic: Homeland Security Secretary Jeh Johnson.

"It is counterproductive to public safety to have this level of resistance to working with our immigration enforcement personnel," Johnson said during a speech in San Francisco yesterday. "It is simply, in my judgement, not acceptable to have no policy of cooperation with immigration enforcement. We're all interested in getting criminals off the streets."

Great, but what will the federal government do about it? Considering the Obama White House has repeatedly failed to condemn sanctuary cities and repeatedly refused to address the Kate Steinle case directly, the answer is unfortunately nothing at all. In the past, Johnson has been hesitant to openly criticize sanctuary city policies and said in July during congressional testimony that the polices were out of the control of Homeland Security, but that he hopes local law enforcement will work with the feds to get violent criminals off the streets.

Homeland Security Secretary Jeh Johnson admitted Tuesday that the administration goofed in releasing an illegal immigrant to sanctuary city San Francisco ahead of a shocking murder earlier this month, but said there’s little the government can do to pressure sanctuary communities to change their minds.


During that same testimony, Johnson also seemed to be clueless as to who Kate Steinle was.

"Has the administration reached out to the Steinle family, to your knowledge?" Rep. Steve Chabot asked Johnson.

"To who?" Johnson replied.

"To the family of the woman who brutally murdered by this individual who had committed seven different felonies in four different states and to my understanding had been deported, kept coming back, has the administration reached out to that family?" Chabot asked again.

"I'm sorry, I don't know the answer to that question sir," Johnson said.


On Capitol Hill, legislation banning and punishing sanctuary cities has been stalled.