FLASHBACK: Obama at The UN "The Future Must Not Belong to Those Who Slander The Prophet of Islam" 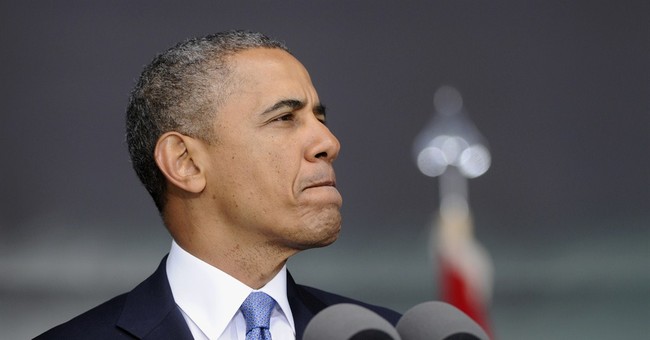 In light of the Islamic terror attack on satirical newspaper Charlie Hebdo in France today, which was carried out in revenge for the publishing of satirical cartoons about Islam, here's a reminder about what President Obama said to the United Nations back in 2012:

"The future must not belong to those who slander the prophet of Islam."

As Conn details, in 2012 the White House condemned Charlie Hebdo for publishing cartoons depicting the Islamic prophet Mohammed. Obama's comments about "slandering the prophet of Islam" were a direct response to Charlie Hebdo's publishing decision.

"We are aware that a French magazine published cartoons featuring a figure resembling the Prophet Muhammad," then-White House Press Secretary Jay Carney said during the September 19, 2012 press briefing, "and obviously, we have questions about the judgment of publishing something like this."

"In other words, we don’t question the right of something like this to be published; we just question the judgment behind the decision to publish it," Carney continued.

Today the terrorists who carried out the Paris attack yelled, "Allahu Akbar" and "We’ve avenged the honor of the prophet!"

Meanwhile, just prior to a meeting with Secretary of State John Kerry at the White House today, President Obama made a short statement to reporters about the terror attack.

"All of us recognize that France is one of our oldest allies, one of our strongest allies," Obama said. "For us to see the kind of cowardly, evil attacks that took place today I think reinforces how important it is for us to stand in solidarity with them."

"We will remain vigilant...[and will] hunt down the specific perpetrators of this, to justice," Obama continued. "We will provide them with every bit of assistance we can."

The President also briefly mentioned that this attack was on journalists and attempted to make the argument that free speech should be protected.

It should be noted that the official White House statement released about the attack earlier today makes no mention of Islamic terror.

When will the future not belong to those who kill in the name of Islam? And when will the President make a statement about that at the UN?
Trending Townhall Video
Biden's Latest Gaffe is Another Major Clue He Has Dementia
Katie Pavlich