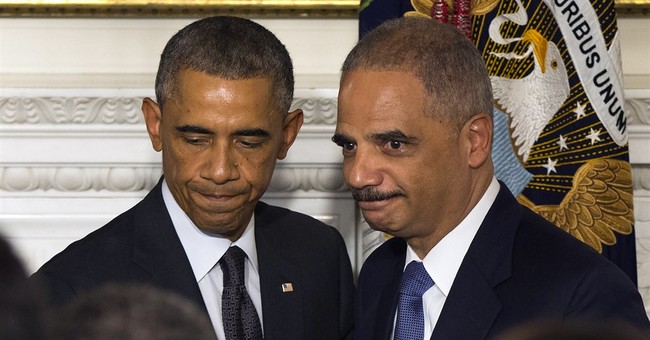 After years of legal battles between the House Oversight Committee and Attorney General Eric Holder, 64,280 redacted Operation Fast and Furious documents held under President Obama's assertion of executive privilege since 2012, have been turned over by the Department of Justice after an order from U.S. District Court Judge Amy Berman Jackson. The Justice Department was originally ordered to turn over a list of documents, better known as a Vaughn Index, with explanations as to why documents fall under executive privilege claims by November 1.

“When Eric Holder wants to know why he was the first Attorney General held in criminal contempt of Congress, he can read the judge’s order that compelled the production of 64,280 pages that he and President Obama illegitimately and illegally withheld from Congress. Since these pages still do not represent the entire universe of the documents the House of Representatives is seeking related to the Justice Department’s cover-up of the botched gun-walking scandal that contributed to the death of a Border Patrol agent, our court case will continue," Chairman Darrell Issa said in a statement. "I am deeply concerned that some redactions to these documents may still be inappropriate and contrary to the judge’s order in the case. This production is nonetheless a victory for the legislative branch, a victory for transparency, and a victory for efforts to check Executive Branch power. As the production is extensive and may contain sensitive information, our investigative staff will be carefully examining the documents turned over last night.”

These documents being turned over is long awaited confirmation from both DOJ and the White House that officials withheld 64,280 documents that do not, and never did, fall under President Obama's executive privilege claims. As a reminder, President Obama asserted executive privilege in this case just moments before Holder was voted in contempt of Congress in June 2012.

"The President and the Attorney General attempted to extend the scope of the Executive Privilege well beyond its historical boundaries to avoid disclosing documents that embarrass or otherwise implicate senior Obama Administration officials," an Oversight Committee release states. "In effect, last night’s production is an admission that the Justice Department never had legitimate grounds to withhold these documents in the first place. Approximately two-thirds of the universe of documents that the Justice Department withheld from Congress has now been shown to be well outside the scope of Executive Privilege."


Although tens of thousands of documents have been released to lawmakers on the Oversight Committee, there are still a number of existing Fast and Furious documents being withheld from Congress and the American people.

"If the Department identifies additional material that is appropriate for release, we will work with you to arrange for a supplemental productions. Likewise, the Department reserves the right to seek the return of any privileged material that may have been inadvertently disclosed," DOJ Assistant Director John Tyler wrote in a cover letter attached to the documents and submitted to Congress.

The legal battle between DOJ and the House Oversight Committee is ongoing. Attorney General Holder announced his resignation in September, but will not leave office until a replacement is confirmed after the midterm elections.