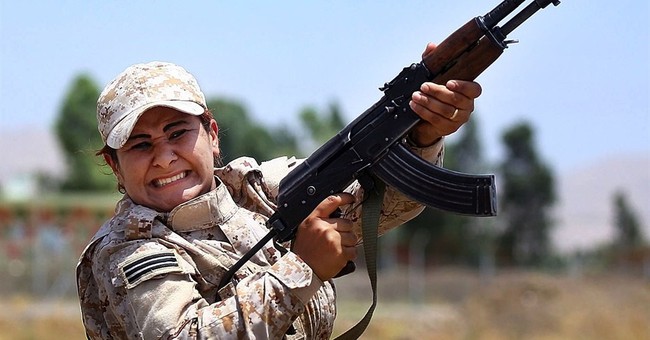 A group of former U.S. Special Operations Veterans have launched a crowdfunding campaign, Operation Limitless Compassion, to help the Kurds fight off ISIS terrorists in Iraq. Castle International, a world-wide air ambulance company founded and operated by former special operations volunteers, is leading the way to provide pro-U.S. Kurdish fighters with desperately needed humanitarian aid, medical training, medical supplies, and combat training. Recon teams from Castle International have already deployed to northern Iraq to offer direct assistance to Kurdish fighters and more will head to the region in November. Castle International has launched two crowdfunding sites to gather donations, GoFundMe and YouCaring.com, with a goal of raising $100,000 for the operation.

"Castle International LLC Special Projects Group (SPG) is spearheading a volunteer humanitarian effort to assist the peoples of Kurdistan. The volunteer group is made up of former British and American Special Operations Veterans of the wars in Iraq and Afghanistan who are passionate about serving oppressed people around the world. The current level of assistance to the Kurdish peoples from the west is woefully inadequate. Assistance that is currently provided only serves to stem the tide of ISIS's gains that they have achieved during their steam roller advance across Syria and Iraq to reestablish a genocidal Caliphate," Castle International COO and former Army Ranger Jesse Johnson, who has served in Iraq and Afghanistan, said in a statement. "The volunteers of SPG feel like they can no longer sit idly by while the enemies of free societies try to eradicate us. The situation is simply unacceptable to anyone who calls themselves a supporter of human rights and freedom. Utilizing our unique medical and Special Operations backgrounds we can take action to create positive results that protect our way of life."

"Kurdish fighters are known for their élan and willingness to close the distance with the enemy but they lack the basic individual soldier skills to increase their lethality as well as their own survivability. Castle International LLC SPG will provide the foundation of skills that will ensure the defeat of militant Islam and the reestablishment of the Caliphate by empowering the only people in the region who are willing to fight for what they believe in," Johnson further states. "The Castle International LLC SPG mission to Northern Iraq will focus on caring for Kurdish Fighters Wounded in Action (WIA) on the frontlines, training individual fighters in the facets of Tactical Combat Casualty Care (TCCC) to increase their own survivability and lastly create sustainable logistical lines to provide Casualty Evacuation (CASEVAC) to the Kurdish fighters. Castle International LLC SPG will be running the project from donations through two crowd funding sites. Donations will go towards equipment, travel, and logistical support for the mission."

Castle International was recently featured by local Phoenix television news station ABC 15 where Johnson discussed the project. The group has also sent veterans to help with the Ebola crisis in West Africa.

Soon their skills will also be headed to Iraq as the company volunteers to provide humanitarian aid and training for the Kurdish people.

“Train, equip and advise these guys to go in and them survive against ISIS,” said Castle’s COO Jesse.

Several people are already doing reconnaissance in the region with plans to send an entire team over next month.

“We are those people that can go make that positive impact,” Jesse said. “So instead of sitting on a bar stool and saying ‘I wish someone would do something about it,’ we're going to get it done.”

If you want to donate to Operation Limitless Compassion, you can do so here and here.