John Kerry: Threat From Climate Change is Just Like ISIS 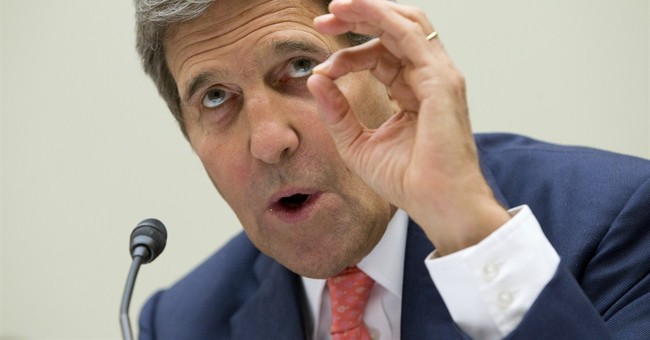 Secretary of State John Kerry, the world's top diplomat, is warning that climate change poses as much of a threat to the world as ISIS. More from The Hill:

Secretary of State John Kerry said the threats posed by climate change should be addressed with as much "immediacy" as confronting the Islamic State in Iraq and Syria (ISIS), and the Ebola outbreak.

During a meeting with foreign ministers on Sunday, Kerry said global warming is creating "climate refugees."

"We see people fighting over water in some places. There are huge challenges to food security and challenges to the ecosystem, our fisheries and ... the acidification of the ocean is a challenge for all of us," Kerry said.

"This also has an immediacy that people need to come to understand, but it has even greater longer-term consequences that can cost hundreds of billions, trillions of dollars, lives, and the security of the world," Kerry continued.

While there isn't much evidence to support Kerry's claim that climate change is creating "climate refugees," over the past four days more than 130,000 people have fled Syria because of ISIS.

The number of Syrian refugees who have reached Turkey in the past four days after fleeing advancing ISIS militants now totals 130,000 and could rise further, Turkey’s deputy prime minister warned on Monday. “A refugee wave that can be expressed by hundreds of thousands is a possibility,” said Numan Kurtulmus warned. …

“This is not a natural disaster… What we are faced with is a man-made disaster,” Kurtulmus said. “An uncontrollable force at the other side of the border is attacking civilians.”

And then of course there was the horrifying situation last month when 40,000 Christian Yazidi refugees were stranded on a mountain top as ISIS climbed to slaughter them.

Tens of thousands of members of Iraqi religious minority groups driven from their homes for fear of the jihadist group Islamic State are dying of thirst and heat on a desert mountainside in the north of the country, according to the United Nations and human rights groups.

Some 40 children have already died from the heat and dehydration, the UN children’s organisation Unicef says, while upwards of 40,000 more are sheltering in the bare mountains, without food or water or access to supplies. It says 25,000 children may be stranded.


Back in February and prior to ISIS beheading two American journalists, Kerry made similar comments when he classified climate change as the world's "most fearsome" weapon of mass destruction.

Exit question: When Kerry will have the nerve to get out of the cushy UN board room and into a refugee camp to make his asinine climate change comments?