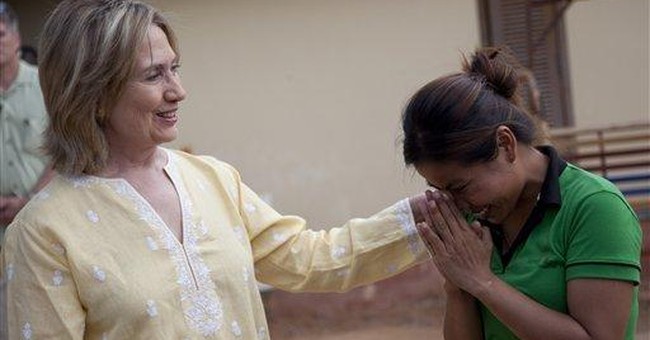 The State Department seems to have a sexual exploitation problem on its hands. Three weeks ago we learned from a State Department whistleblower who works inside the Inspector General office that officials interfered with internal investigations into sexual misconduct. That misconduct included a US Ambassador soliciting sexual favors from prostitutes and minors.

A State Department officer has been accused of selling visas for sex and money in what may have been a massive human trafficking operation, The Daily Caller has learned.

The State Department acknowledged last week that one of its officials is the target of a probe over “allegations of improprieties relating to a Consular Officer formerly assigned to Georgetown, Guyana” without providing further details. Local media are also claiming the official, who was recently withdrawn from normal duties pending completion of an official investigation, associated with drug lords as part of his visa scam.

The scandal began when executives and tourists complained that their visa applications were being held up, and local media began reporting that a visa official was demanding bribes and sex in exchange for visas.

Penalties for human trafficking are stiff in the United States and the State Department is supposed to sanction countries when their officials engage in sexual exploitation of trafficked victims.

Human trafficking is a serious federal crime with penalties of up to imprisonment for life. Federal law defines “severe forms of trafficking in persons” as: “(A) sex trafficking in which a commercial sex act is induced by force, fraud, or coercion, or in which the person induced to perform such act has not attained 18 years of age; or (B) the recruitment, harboring, transportation, provision, or obtaining of a person for labor or services, through the use of force, fraud, or coercion for the purpose of subjection to involuntary servitude, peonage, debt bondage, or slavery.” [U.S.C. §7102(8)] In short, human trafficking is modern-day slavery.

The State Department is clearly experiencing an epidemic of sexual exploitation in a culture of irresponsibility despite claiming to fight sex trafficking on its website.


And as a reminder, the Department of Justice has been ignoring the sex trafficking of minors for years under Attorney General Eric Holder.

Crimes involving minors are meant to trigger an immediate and swift response by the FBI. Instead, these cases were not pursued by the Bureau.