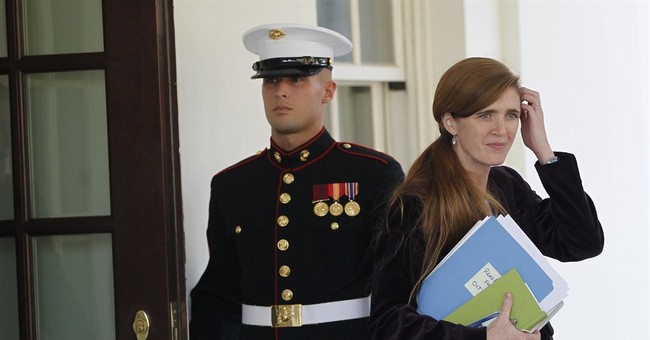 Now that President Obama has promoted former UN Ambassador Susan Rice in return for her spewing garbage about Benghazi to the American public, he's replaced her with radical Samantha Powers. So, who is Samantha Power? Let's take a look.

Powers called Hillary Clinton a "monster" once during her time as a 2008 Obama campaign advisor, which, given the never ending volatile relationship between the Obama's and the Clintons, is pretty funny.

Hillary Clinton has been branded a "monster" by one of Barack Obama's top advisers, as the gloves come off in the race to win the Democrat nomination.

In an unguarded moment during an interview with The Scotsman in London, Samantha Power, Mr Obama's key foreign policy aide, let slip the camp's true feelings about the former first lady.

"We f***** up in Ohio," she admitted. "In Ohio, they are obsessed and Hillary is going to town on it, because she knows Ohio's the only place they can win.

Power is married to regulatory radical Cass Sunstein and has a history in journalism. Here is her bio from WhiteHouse.gov:

Samantha Power is Former Special Assistant to the President and Senior Director for Multilateral Affairs and Human Rights at the National Security Council. Power most recently served as the Anna Lindh Professor of the Practice of Global Leadership and Public Policy at Harvard’s John F. Kennedy School of Government, where she taught courses on U.S. foreign policy, human rights, and extremism and where she was the founding Executive Director of the Carr Center for Human Rights Policy.

She is the Pulitzer Prize winning author of "A Problem from Hell": America and the Age of Genocide (2002) and Chasing the Flame: Sergio Viera de Mello and the Fight to Save the World (2008), the basis for the award-winning HBO documentary, "Sergio." She is also the recent editor, with Derek Chollet, of The Unquiet American: Richard Holbrooke in the World (2011). Power has served as a columnist at Time Magazine and, in her journalism, has reported from such places as Bosnia, East Timor, Kosovo, Rwanda, Sudan, and Zimbabwe, and contributed regularly to the New Yorker Magazine, the New York Review of Books, and the New Republic.

Power is a graduate of Yale University and Harvard Law School. She lives with her husband, Cass Sunstein, and their son Declan in Washington, DC.

Power is anti-Israel, embraces the Palestinians and said during an interview at the Institute of International Studies at UC Berkeley in 2002:

"[W]hat we need is a willingness to put something on the line in helping the situation. Putting something on the line might mean alienating a domestic constituency of tremendous political and financial import; it may more crucially mean sacrificing -- or investing, I think, more than sacrificing -- billions of dollars, not in servicing Israel's military, but actually investing in the new state of Palestine, in investing the billions of dollars it would probably take, also, to support what will have to be a mammoth protection force, not of the old Rwanda kind, but a meaningful military presence. Because it seems to me at this stage (and this is true of actual genocides as well, and not just major human rights abuses, which were seen there), you have to go in as if you're serious, you have to put something on the line.”

It's essential that some set of principles becomes the benchmark, rather than a deference to [leaders] who are fundamentally politically destined to destroy the lives of their own people. … I do think in that sense, both political leaders have been dreadfully irresponsible. And, unfortunately, it does require external intervention…Any intervention is going to come under fierce criticism. But we have to think about lesser evils, especially when the human stakes are becoming ever more pronounced.”

So, Obama has chosen an anti-Israel ambassador to represent the United States at the anti-Israel United Nations. What could possibly go wrong?