Alinsky 101: Left Accuses Conservatives of Being Violent Against Themselves in Michigan

Yesterday we brought you news of union members in Michigan becoming violent against conservatives. First, there was the tearing down of a large Americans for Prosperity tent while women and elderly people were inside and then conservative activist Steven Crowder was punched in the face four times and threatened with murder. Now, straight out the Saul Alinsky playbook, the Left, the Teamsters Union and MSNBC's Ed Schultz are accusing AFP of tearing down their own tent down and are accusing Crowder of provoking union workers to attack him. The Teamsters have gone so far as saying the protest in Michigan was peaceful until disruptive right-wingers turned it violent. More from Twitchy and Twitter: 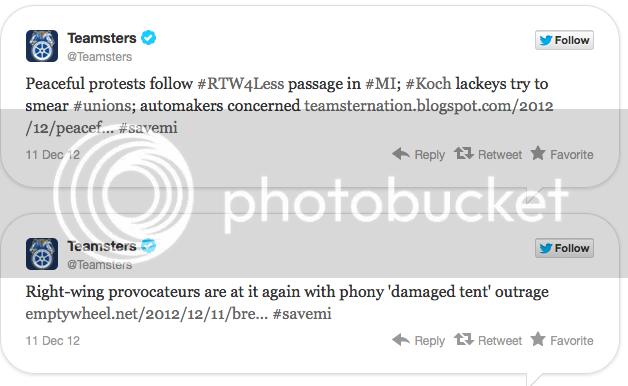 Dubious claims? Right, those four sucker punches Crowder took in the face, resulting in a forehead cut and chipped tooth, sure are dubious. The same goes for the loud cheers from union workers after they ripped down the AFP tent. You be the judge.

Predictably, the Left is also saying the first video above was selectively edited to make union members look bad.

Fox News contributor Steven Crowder is working overtime on the effort to create a violence narrative, claiming to have been punched repeatedly and promoting a video spliced and edited to the point of hilarity—you're not supposed to figure out that in between the obvious cuts, Crowder is provoking people into yelling at him.

From the Teamster's blog:

And here is MSNBC's pathetic attempt to spin the story:

But one eyewitness tells MSNBC.com he thinks there may be more to the story. Thomas Duckworth, a Michigan resident and lifelong union member, said he’d been at the AFP tent earlier in the day, when he noticed a man in an NRA hat. Later, he said, he saw the man deliberately loosening the ropes holding the tent up. Duckworth acknowledged that labor supporters had cheered the tent’s collapse, but suggested that AFP had deliberately helped initiate the it, in order to depict their adversaries as an unruly mob.

Right, AFP loosened the ropes so union thugs could cheer at its collapse. It's totally normal for peaceful people to cheer when a massive tent is collapsing with people inside of it......not to mention the videos above show union workers rushing the tent before its collapse. These are Alinsky tactics 101: accuse your opponent of what you're actually doing.

This video shows a union protester of cutting up the collapsed tent and handing out pieces as souvenirs.

Last night Crowder went on Hannity to talk about his experience.