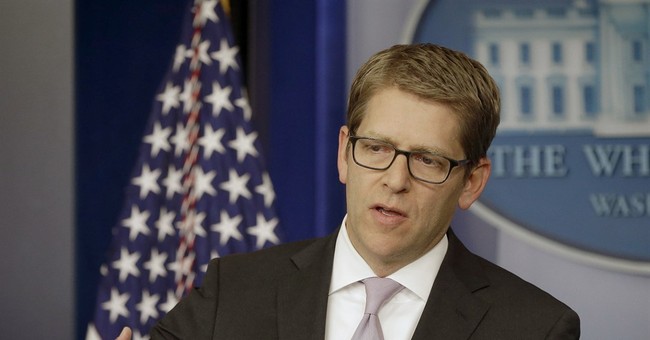 At today’s press briefing, Jay Carney reiterated much of what he said yesterday regarding the multiple scandals plaguing the Obama Administration, once again working to distance the president himself from his wayward colleagues.

Unlike yesterday’s hammering, today’s briefing focused on President Obama’s statement regarding the IRS scandal, issued last night. Reporters wanted to know what, exactly, the president meant when he said he wants those responsible to be held accountable. Does he support firings? Jail time?

Calling the behavior “inappropriate” and “wrong,” Carney could not say anything specific about “accountability.” However, he pointed out that the president would be meeting with Treasury officials this afternoon, including Secretary Jack Lew, to discuss the matter. President Obama feels “very strongly” about the need for accountability and ensuring this never happens again, said Carney, although he couldn’t say what that meant, specifically, as “the president cannot comment on an ongoing investigation.”

“I have no personnel announcements to make,” he said.

Yesterday, Carney refused to comment on what the president thought of the IRS scandal, continually saying “if it happened” (despite IRS officials’ own admissions that the IRS targeted conservative groups), and refusing to comment on the matter until the president reviewed the Inspector General’s report.

Turning to another unfolding indiscretion, reporters in the room seemed awfully curious about the president’s sudden renewed interest in passing media shield legislation, to help protect the press from unwarranted scrutiny over sources. Given the AP hacking discovery, isn’t the timing rather suspect, and perhaps a transparent attempt to save some face?

No, Carney maintained, the president just felt it was “the right time” to have Sen. Chuck Schumer reintroduce his legislation. “The president has a long record of strong support for the First Amendment,” he said, although there was some apparent skepticism among the questioners.

Reporters also wished to know what the president had to say on the hacking scandal, but again, Carney refused to comment owing to the “ongoing criminal investigation,” and the fact that there is a “firewall” between the White House and the Department of Justice during times such as these.

Interestingly, at one point a reporter expressed skepticism that the president was actually learning about all the scandals from news reports, as the White House has consistently maintained whenever something goes awry.

“I would be interested to see reports if it was about the White House interfering with a Department of Justice criminal investigation,” came the response. Indeed, it seems that’s about the only thing that hasn't happened this week.