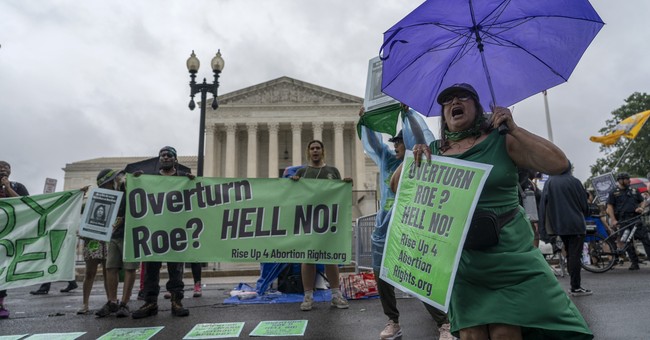 WASHINGTON, D.C. — Pro-abortion protesters showed up to the Supreme Court once again, despite the rain, on Thursday as the nation's highest court to demonstrate against Roe v. Wade from being overturned with the soon-to-be decided Dobbs v. Jackson case.

While the Dobbs decision was not released on Thursday, pro-abortion protesters continued their call for abortion access to not be limited since, as one speaker put it, preventing women from having abortions is akin to slavery and bondage. One woman began chanting, "Regulate ejaculations!"

Pro-abortion speaker outside the Supreme Court: It is a form of slavery to deny women the ability to have abortions. pic.twitter.com/Ma5WhuHHD2

Pro-abortion protester stating “Regulate ejaculations!” over and over. pic.twitter.com/Tl78sCpvvp

The protesters further called for the country to be shut down should Roe be overturned and abortion laws go back into the hands of the states.

“WE WILL NEED TO SHUT THIS COUNTRY DOWN”

Pro Abortion Protesters proclaim if Roe v Wade is overturned they will “rise up” and “shut this country down” outside of the Supreme Court here in DC | @TPUSA pic.twitter.com/oH3c0MQat1

While no violence occurred outside the Supreme Court, pro-life pregnancy centers continue to be targeted across the country by, presumably, pro-abortion radicals.