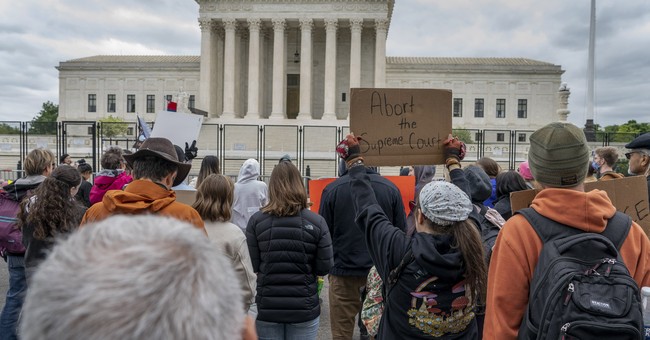 The Department of Homeland Security is preparing for leftists to carry out acts of violence if the Supreme Court follows through on overturning Roe v. Wade, as detailed by a leaked opinion draft authored by Justice Samuel Alito.

Threats of violence against the Supreme Court and the conservative justices have reached new highs since the leak, as the overturning of Roe v. Wade would send abortion laws back to the states.

Axios reported that a leaked memo from DHS details "law enforcement agencies are investigating social-media threats to burn down or storm the Supreme Court building and murder justices and their clerks, as well as attacks targeting places of worship and abortion clinics."

"The unclassified May 13 memo by DHS' intelligence arm says threats that followed the leak of a draft opinion — targeting Supreme Court Justices, lawmakers and other public officials, as well as clergy and health care providers — 'are likely to persist and may increase leading up to and following the issuing of the Court's official ruling.'"

Axios noted that while violence has been carried out by anti-abortion extremists, "the memo warns that this time, extremist acts could come from abortion-rights proponents as well."

"The mere advocacy of political or social positions, political activism, use of strong rhetoric, or generalized philosophic embrace of violent tactics does not constitute domestic violent extremism or illegal activity and is constitutionally protected," the memo states.

A DHS spokesperson told Axios the department "is committed to protecting Americans' freedom of speech and other civil rights and civil liberties, including the right to peacefully protest."

The increased calls for violence against members of the Supreme Court are especially concerning, given pro-abortion protesters have shown up at the homes of the conservative justices to pressure them to not overturn the landmark case. Protesting at the homes of judges, witnesses, and others involved in the judicial system is against federal law.