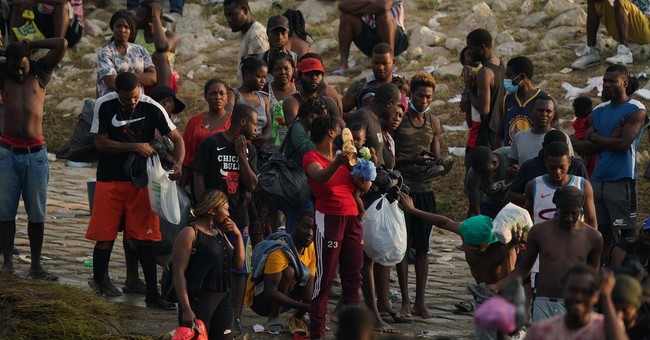 U.S. Customs and Border Protection (CBP) finally released September's apprehension numbers late Friday afternoon after questions were raised on the lack of data now that October is nearly over.

In September, the number of encounters along the U.S.-Mexico border remained historically high at 192,001. It is a drop from August, which saw 209,840 encounters. In September 2020, CBP encountered 50,014 illegal immigrants.

"CBP encounters along the Southwest border declined in September from the prior month, and a majority of non-citizens encountered were expelled under Title 42. The men and women of CBP continued to rise admirably to the challenge, despite the strain associated with operating during a global pandemic that has claimed far too many lives among our frontline personnel," said CBP Acting Commissioner Troy Miller in a press release.

The month of September also saw a surge in Haitians illegally entering the U.S. from Mexico into the city of Del Rio, Texas. Due to the large numbers in such a short amount of time, Border Patrol was forced to house a majority, up to 15,000, under the international bridge, leading to third-world-like conditions.

"No doubt the Biden administration will try to spin these still sky-high numbers as some sort of win, but don’t be fooled. These 192,000 apprehensions are still more than 40,000 higher than the highest monthly total during the 2019 crisis, a crisis that then-President Trump quickly and successfully moved to solve. The Biden administration knowingly created a crisis because it sees a political benefit in mass illegal immigration, and thus it has no interest in slowing the historic surge to our border," Mark Morgan, former acting CBP commissioner and Heritage Foundation visiting fellow, said in a statement.