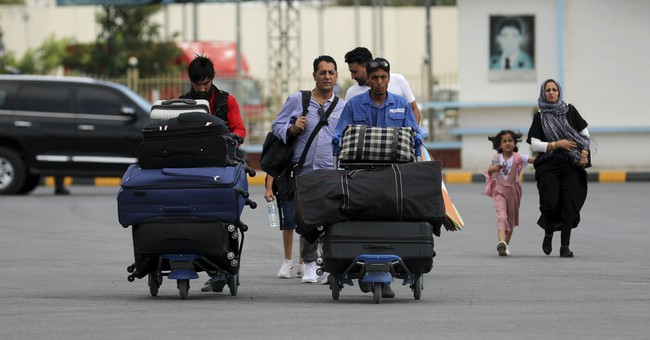 Saber Nasseri, who is originally from Afghanistan and worked as an interpreter for the U.S. military, begged President Joe Biden to do a better job of evacuating Afghans who are loyal to the U.S. and now face death with the Taliban hunting people down who worked with the Afghan government.

Nasseri now lives in the U.S. but he told Fox News host Sean Hannity he still has family who are now stuck in Afghanistan as the Taliban is preventing people from going inside Hamid Karzai International Airport.

"Yes, my family moved from one location to another. They have not been safe yet. They are outside at the gate, and the Taliban, they hate my family members. My other family members are hiding right now...but Mr. Joe Biden isn’t [helping]. He broke his promise. He left my family and other Afghan Americans behind," Nasseri said. "The Afghan Americans over there, they have very hard times, and the families, they're crying. I received a hundred, hundred messages, and my hands shaking, it's become too weak, I couldn’t sleep and eat because I am worried about my family and other Afghan-American allies in Afghanistan, Kabul airport."

"My message, Mr. Joe Biden, I know you broke your promise. I know that you left us behind. But for humanity, please save all Afghan American allies, that they are suffering behind the gate, and they cannot go back home. If they go back, the Taliban will behead them, so please, please, listen to the innocent people and help them, and if not, I might go back to Afghanistan and support those innocent families. Thank you, Mr. Joe Biden," he continued.

Even though the Biden administration and the Department of Defense have told Americans and Afghans with paperwork to go to the airport in Kabul, there are many videos and reports stating it is near impossible to get past the gates as Taliban fighters are shooting above the crowd and beating people who attempt to enter. As of now, the U.S. military is not being allowed to expand its perimeter to make it easier for people to reach the airport.