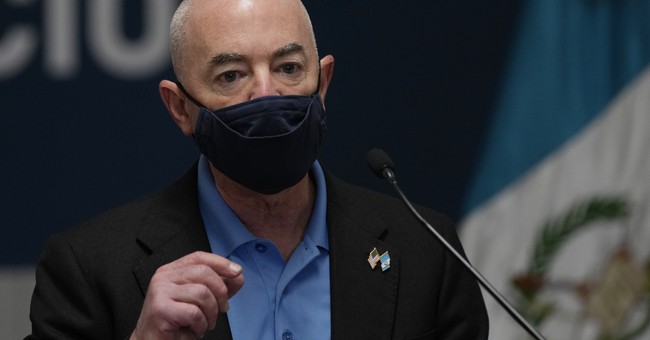 Secretary of Homeland Security Alejandro Mayorkas admitted the current crisis at the U.S.-Mexico border is unsustainable and the historically high apprehension numbers are not good, according to leaked audio obtained by Fox News.

The audio came from a meeting Mayorkas had with Border Patrol when he visited the Rio Grande Valley on Thursday.

"A couple of days ago I was down in Mexico, and I said look, you know, if- if our borders are the first line of defense, we're going to lose and this is unsustainable," Mayorkas said Thursday, according to the audio obtained by Fox News reporter Bill Melugin through a Border Patrol source. "We can't continue like this, our people in the field can't continue and our system isn't built for it."

Mayorkas added the current border situation "cannot continue" because the federal government's system was not designed to handle an influx of illegal immigrants such as the one the U.S. has seen in recent months and he was "very well" aware that the Rio Grande Valley Sector recently came close to "breaking."

"It’s our responsibility to make sure that that never happens again," he said.

“This is unsustainable. These numbers cannot continue.” pic.twitter.com/60sQDuApWl

What Mayorkas privately admitted to — and what most of the country already realizes about the current border crisis — is telling given the fact he, along with the rest of the Biden administration, has tried to downplay how severely the situation has deteriorated. That leaves us with the knowledge that the Biden administration has been lying to the American public about the terrible situation they helped create through open-border policies.

It was revealed on Thursday U.S. Customs Border Protection had 212,672 apprehensions along the southern border in July, another record for the agency. Only 95,788 of July's encounters resulted in a Title 42 expulsion.