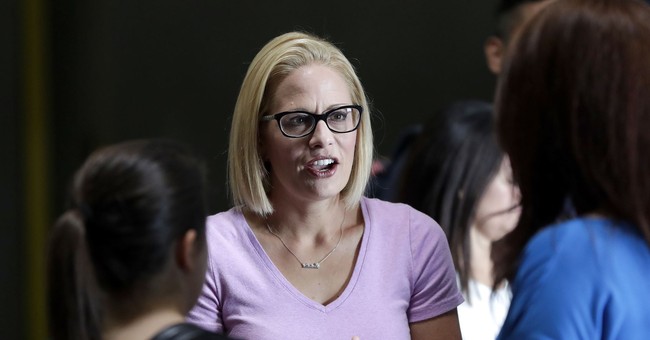 Arizona Sen. Kyrsten Sinema (D) has joined the small chorus of Democrats who are calling out President Joe Biden and his administration for their continued terrible approach to the ongoing influx of illegal immigrants crossing the U.S.-Mexico border.

Sinema took a potshot at the Biden administration for refusing to call the situation a crisis during her interview with Arizona radio station KTAR News.

"What I’m waiting for is the administration to take bold action to actually address these concerns," Sinema said.

"The reality is that this is a crisis," she continued. "We all know it. And the federal government must do more to address this surge of migrants who are coming to the border with increasing numbers each year. Like, you probably noticed, but we’re looking at numbers this year that are the highest number of crossings that we’ve seen in 20 years in Arizona. So, we really are seeing how this problem has exacerbated and gotten worse."

Sinema wants the Biden administration to formally declare the situation an emergency so the National Guard can provide support to law enforcement agencies, similar to what former President Donald Trump did when he was in office and faced an influx of illegal immigrants.

While most Democrats have tried to ignore or downplay the crisis, Rep. Henry Cuellar (D-TX) has been one of the few Democrats to repeatedly put public pressure on the Biden administration to do more than just send Vice President Harris to Latin American countries.

"I mean, look at the people that they release on process control discretion, it’s about 8,500 people that they’ve released on the honor system and they’re not even part of the — have not been given a notice to appear, they’re not part of the immigration system," he said. "So to say that we have everything under control — you know I’m supportive of President Biden, I’m a supporter of his, but you know we’re not paying attention to the border’s communities and — and it’s — this is not under control, I can tell you that."