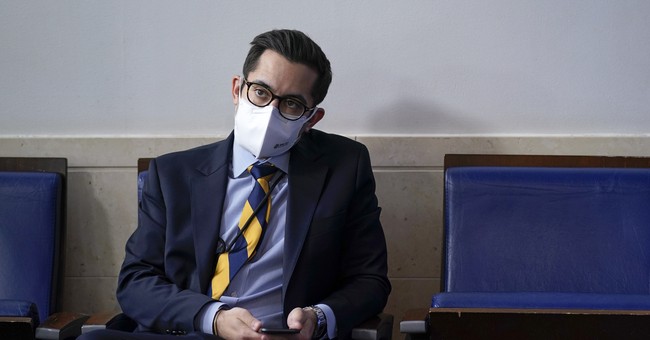 T.J. Ducklo, a deputy White House press secretary, reportedly threatened a Politico reporter who was investigating his relationship with an Axios reporter who had covered then-candidate Joe Biden's campaign, seemingly creating a glaring conflict of interest.

Vanity Fair reported in a phone call with Tara Palmeri that Ducklo was beyond unprofessional when he told her to drop the story:

"The confrontation began on Inauguration Day, January 20, after Palmeri, a coauthor of Politico’s Playbook, contacted McCammond for comment while one of her male colleagues left a message for Ducklo, according to sources...But instead of calling the male reporter who initially contacted him, Ducklo tried to intimidate Palmeri by phone in an effort to kill the story. 'I will destroy you,' Ducklo told her, according to sources, adding that he would ruin her reputation if she published it.

"During the off-the-record call, Ducklo made derogatory and misogynistic comments, accusing Palmeri of only reporting on his relationship—which, due to the ethics questions that factor into the relationship between a journalist and White House official, falls under the purview of her reporting beat—because she was 'jealous' that an unidentified man in the past had 'wanted to fuck' McCammond 'and not you.' Ducklo also accused Palmeri of being 'jealous' of his relationship with McCammond. (Palmeri had no prior relationship or communication with McCammond before calling her to report on the Playbook item, which was a story that she was assigned and had not independently pursued.)"

After the call, according to Vanity Fair, top editors at Politico had meetings with the Biden White House to get Ducklo to apologize to Palmeri. The meetings included White House Press Secretary Jen Psaki, White House Communications Director Kate Bedingfield, and Biden senior adviser Anita Dunn.

Ducklo reportedly apologized for losing his cool, but he did not apologize for any specific remarks.

The incident will be a test for the White House after President Joe Biden promised he will fire anyone "on the spot" if he finds out they "treat another colleague with disrespect, talk down to someone...No if, ands, or buts. Everybody — everybody is entitled to be treated with decency and dignity."

The morning the story dropped, Psaki tweeted, "Compassion and kindness is back."

Compassion and kindness is back https://t.co/vibvRrCCMr

Shortly after the story broke, the daily press conference that was supposed to take place at 12:30 p.m. ET has been pushed back to 1:00 p.m.

In tweets posted to her official account, Psaki stated Ducklo will be placed on one week leave with no pay.

"In addition, when he returns, he will no longer be assigned to work with any reporters at Politico," Psaki added, confirming he will not be fired as Biden had previously promised. It is also worth noting that, according to Vanity Fair, the White House knew about Ducklo's behavior and only took action when his behavior was publicly revealed.

TJ Ducklo has apologized to the reporter, with whom he had a heated conversation about his personal life. He is the first to acknowledge this is not the standard of behavior set out by the President.

With the approval of the White House Chief of Staff, he has been placed on a one-week suspension without pay. In addition, when he returns, he will no longer be assigned to work with any reporters at Politico.

At the White House press briefing, Psaki was asked about Biden's "fire you on the spot" promise. She said it was clear Ducklo's behavior was not acceptable and the one-week suspension is an appropriate course of action. Psaki said she did not consult with Biden about Ducklo's punishment.

WH Press Sec. Jen Psaki when asked about Biden's "fire you on the spot" promise with regards to the TJ Ducklo situation: "It doesn't meet our standard. It doesn't meet the president's standard." pic.twitter.com/oztJCHXn4o