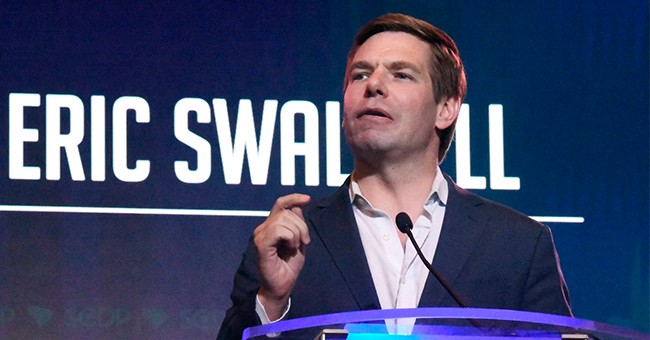 Rep. Eric Swalwell (D-CA) has not been having a good December ever since it was revealed he appears to have been the target of at least one Chinese spy during his early political career.

Though federal investigators say Swalwell did nothing wrong, as he said he cut off all ties with her after he was made aware of her possible ties to the Chinese Communist Party, there are a lot of questions remaining as to just how close he was with Fang Fang, also known as Christine Fang, and whether he will remain on the U.S. House Permanent Select Committee on Intelligence.

Fox News was able to catch up with Swalwell but was not in the mood to answer questions about Fang.

"Congressman Swalwell, do you plan on stepping down from the Committee or anything like that? Or resigning from Congress? Can you tell us anything about your relationship with Ms. Fang? Anything in general?" the reporter can be heard as Swalwell, wearing AirPods, simply walked past him.

Swalwell has been under intense criticism from House Republicans and want him to be removed from the House Intel Committee, one of the hardest committees to be assigned to, saying he poses too much of a risk and a ripe target for foreign entities.

"He’s jeopardizing national security. What is being said in those meetings inside the SCIF that we don’t want other people to hear or listen? You can’t not, you can not take in your watch. You cannot take in your phone, but here, we have an individual, who Nancy Pelosi, this is the real question. When did Nancy Pelosi know of this and why did she maintain him on the committee? Adam Schiff, who has spent four years as chair, worried about the foreign intervention into our country, knowingly keep an individual on the committee, if he knew as Swalwell says that he was with a Chinese individual who was a spy, who helped him run for Congress," House Minority Leader Kevin McCarthy (R-CA) has previously stated.