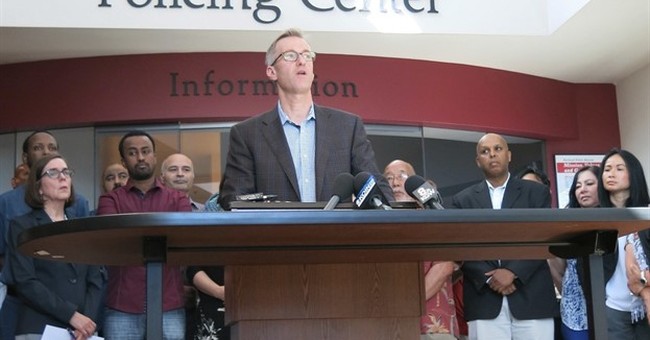 The "Red House Autonomous Zone," Portland's version of Seattle's short-lived CHAZ, appears to be coming to end after the city issued an apology and promised to not "attack supporters" of the family that is at the center of a lengthy legal battle.

The Twitter account belonging to the Red House On Mississippi, named for the color of home and street it is located on, posted on Sunday asking for people to come to the area to help take down the barricades that were put in place last week.

"The mayor has promised the Kinney family that they will not raid Red House as long as the barricades are taken down by Monday night," the account tweeted, noting the city issued an apology.

The "autonomous zone" was established after the Portland Police Bureau and Multnomah County Sheriff's Office personnel tried to serve an eviction notice but were chased out of the area after a crowd of rioters fought them. The area and access points were seen to be patrolled by armed occupiers.

The Oregonian reported the apology, signed by Mayor Ted Wheeler and Bureau Chief Chuck Lovell, was for the threats the family at the center of the eviction after the two of them publicly denounced the zone.

"We apologize and understand that following our tweets earlier this week that your family received threats," the letter said. "We did not intend to attract attention that results in threats of harm and violence to your family or that escalated tensions in our community. Nobody should be subjected to this kind of stress and harm, and we apologize for the role our tweets played in this."

“I maintain measured optimism that we can accomplish this step and move toward the next steps to advance the safety and well-being of the family and the safety of the neighborhood,” Wheeler said.

"The Portland Police Bureau is aware that many people have worked over the last several days to achieve a peaceful resolution to circumstances along North Mississippi Avenue, North Albina Avenue, North Prescott Street, and the surrounding neighborhood. The whole situation requires extraordinary patience. Many community members have weighed in and proposed positive solutions," the PPB said in a statement. "As work continues toward the restoration of peace and order, victims of crime in the Humboldt neighborhood, and even elsewhere the city, may have delayed reporting crimes to police," adding residents should report crimes that were committed during the zone's establishment.

Recommended
The Five Reasons SCOTUS Overturned Roe and Casey
Spencer Brown
Share this on Facebook
Tweet
Why a Gun Control Activist Deleted His Tweet About the Supreme Court's Abortion Ruling
Matt Vespa
Republicans Praise the Supreme Court's Ruling, Calls For Nation Wide Abortion Ban
Sarah Arnold
These Are the States Where Abortion Is Now Banned
Mia Cathell
Night of Rage: Pro-Abortion Groups Threaten There Will Be No Peace for SCOTUS Justices
Sarah Arnold