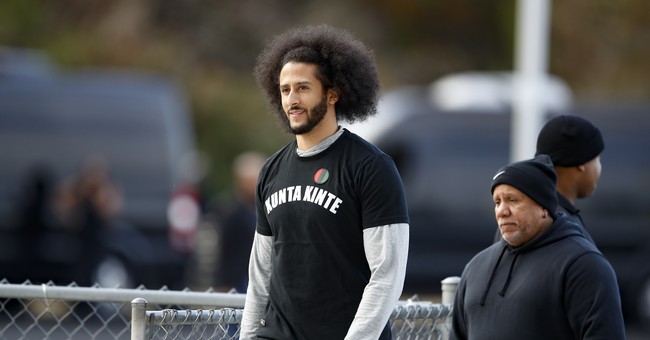 "Change the Whirled" is a non-dairy ice cream, since Kaepernick is a vegan and all proceeds will be going to his "Know Your Rights Camp" organization. Ben & Jerry's have advertised the new flavor as a way to support the movement to "dismantle systems of oppression and empower Black and Brown people."

The new ice cream will be rolled out next year.

I’ve teamed up with @BenAndJerrys to serve up joy on the journey to justice!

100% of my proceeds will go to @yourrightscamp with matching support from Ben & Jerry's pic.twitter.com/OouYwUXPXK

We’ve teamed up with @Kaepernick7! Introducing Change the Whirled Non-Dairy, the flavor that's supporting the fight to dismantle systems of oppression and empower Black and Brown people. Coming to freezers in 2021! Learn more: https://t.co/7c0Se2vut4 pic.twitter.com/LY90ObEwCj

"Ben & Jerry’s Colin Kaepernick’s Change The Whirled Non-Dairy is made with sunflower butter and is 100% certified vegan, just like Kaepernick himself. And Kaepernick’s portion of the proceeds go to Know Your Rights Camp, an organization he founded to empower Black and Brown youth and elevate the voices of the next generation of racial justice leaders. Know Your Rights Camp hosts free camps across America and internationally, engaging Black and Brown youth around social justice issues through education and self-empowerment.

"We’re proud to be working with a dedicated activist like Colin Kaepernick, whose work helped spark the international conversation around racial justice. Follow the graham cracker and chocolate cookie swirls as you dig into this cara-melt-in-your-mouth vegan dessert masterpiece and consider how you, too, can help change the whirled."

Kaepernick is most known for starting the protest movement of taking a knee while the national anthem was playing at the beginning of NFL games when he was with the San Francisco 49ers. He went on to compare police officers to pigs and praise Cuban dictator Fidel Castro.

Recommended
'It's Called Shut the F**k Up': Cop Wasn't Having Any of the Citizen Policing From This Motorist
Matt Vespa
Trending Townhall Video
Share this on Facebook
Tweet
New Book Details Just How Paranoid Hillary Clinton Was About Trump
Sarah Arnold
Fauci's Net Worth Doubled During Pandemic, As Americans Struggled to Make Ends Meet
Sarah Arnold
DeSantis Calls on Biden to Put 'Politics Aside' As Hurricane Ian Causes Severe Damage
Sarah Arnold
Democratic Poll Admits Another Unfortunate Truth for Democrats on Abortion Issue