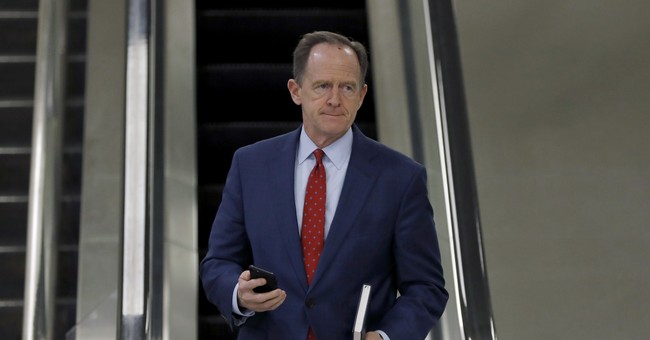 Pennsylvania Sen. Pat Toomey (R) heavily criticized the Pennsylvania State Supreme Court on Friday for "going rogue" in their rulings that were more lenient towards mail-in ballots, which have given Democratic nominee Joe Biden the state.

Decision Desk HQ has called the state, and therefore the election, for Biden based on the votes he has gained from the mail-in ballots.

"In Pennsylvania, unfortunately, it’s been a little bit complicated by a Pennsylvania State Supreme Court that went rogue and decided to violate the U.S. Constitution, ignore Pennsylvania law, and just rewrite the law themselves. They have no authority to do that," Toomey said.

"And they extended the period of time over which ballots can arrive beyond the deadline. That’s outrageous, frankly. Now, it’s really important that those ballots be segregated because it is against the law, it is unconstitutional and, you know, one part of this process is litigating these kinds of issues," he continued. "Now, if the President has evidence of fraud, he should bring it to a court. Let’s get it out in the open, let’s litigate that and let’s fix it and, by the way, punish anybody who did any wrong. In this case, I think it was the Pennsylvania Supreme Court that suggested ballots that arrived too late should nevertheless be counted. No, they shouldn’t."

“We believe the American people deserve to have full transparency into all vote counting and election certification, and that this is no longer about any single election. This is about the integrity of our entire election process. From the beginning, we have said that all legal ballots must be counted and all illegal ballots should not be counted, yet we have met resistance to this basic principle by Democrats at every turn. We will pursue this process through every aspect of the law to guarantee that the American people have confidence in our government. I will never give up fighting for you and our nation," Trump said in a statement on Friday.