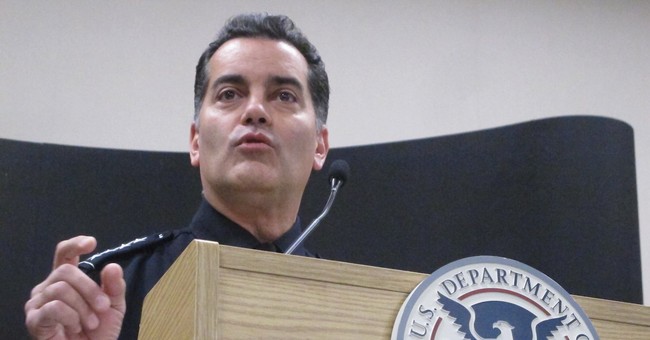 U.S. Customs and Border Patrol Deputy Commissioner Robert Perez praised President Trump's decision to restrict travel from China during the initial stages of the COVID-19 pandemic and said the pandemic has not slowed down the construction of the border wall system during an interview with Townhall.

Perez serves as CBP's highest ranking career official, meaning he is not a political appointee, and has been with the federal agency for over 27 years, having starting his career with the U.S. Customs Service in 1992 as a Customs Inspector in Newark, New Jersey.

"I feel pretty confident when I tell you that as we were following the advice of the medical professionals and that with which they were making their really professional opinions and then guiding and directing our department and us to do what they felt necessary by way, medically, to contain the spread and to mitigate the further spread, I feel very confident that that was a critical, an absolutely time and action that the U.S. undertook," Perez said.

Perez said similar actions had been taken during previous outbreaks of foreign-originating diseases, such as Ebola and H1N1.

"I'll defer to the medical professionals to quantify that further, but I think that it was an unquestionably critical step on being able to protect our communities, protect the country," he continued. "Very, very important and I'm grateful that we did it."

Dr. Anthony Fauci, one of the main players on the Trump administration’s coronavirus task force, has previously said the early travel restrictions "has gone a long way" in fighting the virus.

A side effect from the global pandemic is how there has been a significant decrease in regular traffic along the country's northern and southern border, with illegal crossings from Mexico have significantly declined. Perez said agents were apprehending an average 1,200 people a day in March. Today, CBP agents are apprehending around 500-600 people who illegally crossed the border.

While Mexico continues to deal with COVID-19 outbreaks of their own, Perez said the Center for Disease Control guidelines and expediting the return of illegal immigrants to their country of origin has been critical in preventing coronavirus outbreaks within CBP facilities.

Perez said the CDC guidelines came in use when an individual from India was apprehended in California and was symptomatic for COVID-19. CBP followed the guidelines to limit his exposure to others while still processing him. He was later tested and it was confirmed he had COVID-19.

If not for the guidelines and procedures that have been put in place, it is estimated that someone with the virus can expose up to 426 migrants.

"I can't say enough of how critically important it's been to have these COVID policies in place. Again for the safety of the workforce, the communities, the nation, and certainly, the sparing of the medical capacity along that border from getting overwhelmed during a global pandemic," he said.

Perez said that "from a general safety perspective, it's concerning" how some progressive groups have called for U.S. Immigration and Customs Enforcement to release every single one of its detainees to prevent outbreaks of COVID-19 from occurring while they are in custody.

Protests have occurred across the country at ICE detention facilities to demand their release despite some of the detainees having extensive or violent criminal backgrounds.

"It's very concerning that some might not be as aware or appreciate what it means to release these individuals back into the public."

In spite of the ongoing pandemic, CBP is continuing to work on building sections of the border wall system, which Townhall previously reported can be comprised of a multifaceted approach that includes a larger wall, motion sensors, cameras, and light posts.

Perez said they are "firing on all cylinders" on the construction of the border wall system and are set to complete 450 miles by the end of the calendar year.

Today, we completed a 15 mile section of border wall system in El Centro Sector that will provide much needed infrastructure to help USBP agents secure the border.

"It allows for our border patrol agents to gain more operational control of the areas where we have this critical infrastructure, where we have the ability to impede and deny those who would otherwise seek to evade us and really move them into areas where we can control that flow and have greater situational awareness of what's happening on the border," he explained.

Perez praised the men and women of CBP throughout the interview for risking their lives by continuing to work their important jobs in the face of a global pandemic.