GOP Congressman Warns of Food Shortages During Pandemic Because of Regulations 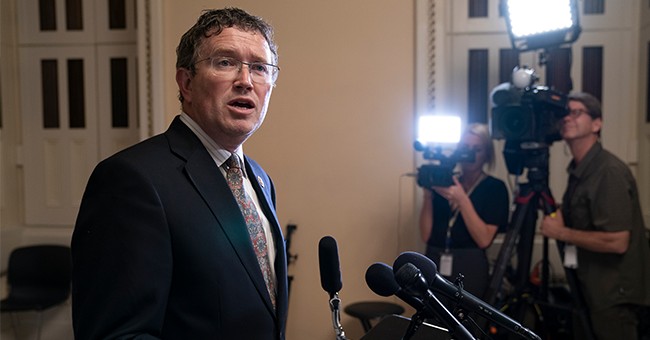 Rep. Thomas Massie (R-KY) warned on Sunday that the food supply chain is in danger of shortages due to the ongoing Wuhan coronavirus pandemic and its effects on food processing workers.

Rep. Massie said the United States Department of Agriculture needs to loosen regulations that could hinder food production and stop the wasting of food with demand lowered in certain areas of the market.

Farmers are having to dump milk and plow over their ripe vegetables that were intended to go to the now-closed schools, restaurants, and hotels.

Other members of Congress own cattle, but only a few of us RAISE cattle.

I fix the fences, feed the hay, castrate bulls, fertilize fields, put tags in their ears, move them between pastures, wean calves.

Rep. Massie said a solution to prevent such food waste would be his PRIME Act. The proposed bill would expand the exemption of federal meat inspection requirements if it falls under the following:

Rep. Massie said the bill will further allow farmers to provide food, that would otherwise go to waste, directly to consumers and grocery stores:

My bicameral/bipartisan PRIME Act would be a good first step. The legislation would make it possible for farmers to use existing infrastructure to provide food directly to consumers and grocery stores. Cosponsors already include Democrats and Republicans in the House and Senate.

Here’s an interview I did a few years ago that explains how creating one small exemption to one regulation could help facilitate a revival of safe, healthy, local, and affordable beef and pork:https://t.co/cCl6CPxRcz