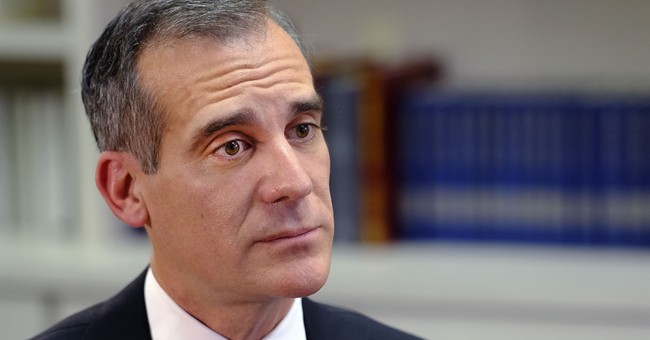 During his daily briefing about the Wuhan coronavirus on Tuesday, Los Angeles Mayor Eric Garcetti announced  businesses that continue to operate despite being deemed as non-essential will have their water and electricity shut off to get them to close down.

Garcetti justified the punishment since Los Angeles and those in Los Angeles County have not yet experienced the full extent of COVID-19 cases, saying the city is 6 to 12 days behind New York City, which is the heaviest hit city in the United States with cases.

Garcetti said his "stay at home" is clear because "it closes non-essential businesses that requires workers to be present in person."

"Most Angelenos have stepped up, heeded the calls to practice physical distancing and I'm so grateful for that. But it isn't enough. We're still getting reports, each day, of non-essential businesses that continue to operate as normal. This behavior is irresponsible and selfish. It may serve a few people for a moment, but will put all of us at risk for a long time. That's why the city must strongly enforce these measures that we have put forward," he continued.

Garcetti explained the non-essential businesses that are caught operating will receive a warning before there is an escalation in enforcement.

KLTA reports L.A. County has 669 confirmed coronavirus cases as of Tuesday, with 11 deaths. The state has 2,566 cases and 51 deaths.

Garcetti's announcement comes as there was some confusion as to what constitutes a non-essential business, such as a gun store. Los Angeles County Sheriff Alex Villanueva ordered county gun stores to close because he determined they are not an essential business. The city of Burbank, which is in the county but has its own law enforcement, said they would allow firearm stores to remain open.

"[Being] closed down hurts small businesses, hurts families, it hurts everybody, right? I think we are an essential business. I understand a bar is not an essential business. I think we are," James Janya, one of the owners of Guns Direct in Burbank, told Townhall. Why do you think people are buying guns right now? Because people are scared, it's not because people just want to walk around with a gun. You see the way people are acting over toilet paper, over food? Can you imagine?" he asked.