Here's How the Wuhan Coronavirus Is Affecting the US Military 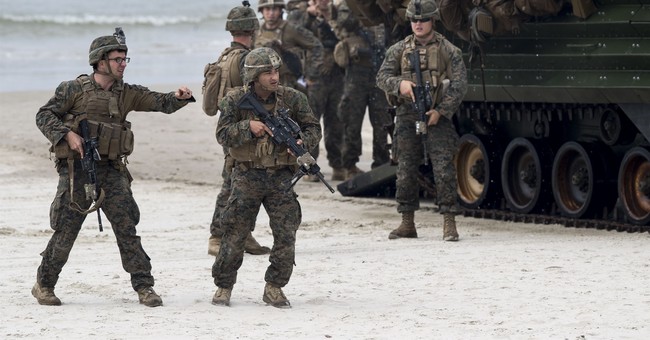 The length of time I go for the U.S. Marine Corps Reserves, commonly referred to as drills, are two-day affairs, occurring on Saturday and Sunday. This past drill, however, was scheduled for four days, starting on Thursday since we were going to the shooting range for our annual rifle qualification.

It's because we were all assembled early Thursday morning to draw our rifles, we did not find out until later in the day that our higher up unit commanders had canceled drill for the other reservists since they had regular two-day drills in other parts of the country. Because we had already assembled and it takes a long time to schedule and execute this yearly requirement, we decided to press on and finish on Sunday.

That did not stop my commanding officer from sending people home who showed up remotely sick or had been exposed to someone at home who was sick.

"It's nothing personal against anyone," he explained. "It's just not worth the risk."

With COVID-19, also known as the Wuhan Coronavirus, spreading across the country, the U.S. military is having to adjust how it operates, and my reserve unit was caught right as the changes were being made. We were informed April's drill had already been canceled. Our chain of command also informed us several overseas rotations in Southeast Asia that some in my unit were scheduled to go to have also been canceled.

The U.S. Navy announced its drills for reservists are canceled.

The Department of Defense announced several changes in the past week to help keep the world's best-combined fighting force healthy and ready. Active-duty personnel, DoD civilians, and their families assigned to DoD installations are not permitted to go beyond a 50-mile radius. There are a few exceptions to the travel restriction that include "compelling cases where the travel is mission-essential, for humanitarian reasons, or warranted due to extreme hardship."

Personnel who were scheduled to change duty stations, or Permanent Change of Station, have been told to standby and wait. The new rules are effective starting on Monday and go through May 11.

The Pentagon, where the DoD is headquartered right across the Potomac River from the nation's capital, has implemented new restrictions on who can enter the building. The new rules went into effect on Sunday:

The National Guard Bureau said on Monday there are about 670 Guard members in 15 states who have been activated to assist in stopping the spread of the coronavirus. Guardsmen have been distributing food, sanitizing public areas, and are coordinating response efforts with state emergency managers.

There have been a few cases of the coronavirus within the active-duty military. The DoD announced last weekend a U.S. Marine assigned to Fort Belvoir, near the Washington, D.C. metro area, had tested positive for COVID-19 and was being treated at Fort Belvoir Community Hospital. The Marine recently returned from an official business trip overseas.