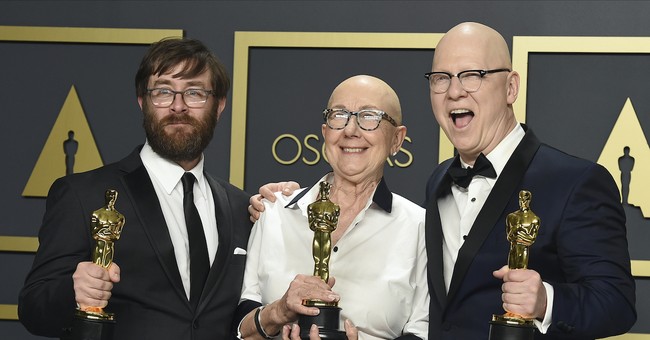 Documentary filmmaker Julia Reichert quoted the "Communist Manifesto" during her acceptance speech at the 92nd Academy Awards after she, Jeff Reichert, and Steven Bognar won Best Documentary Feature on Sunday.

The trio produced "American Factory," which tells the story of a Chinese billionaire opening a new factory at an abandoned General Motors plant in Ohio and its triumphs and challenges.

Reichert quoted the Communist Manifesto when she encouraged the workers of the world to unite, which is a rally cry popularized by Karl Marx and Friedrich Engels' infamous book. The full phrase is, "Workers of the world, unite! You have nothing to lose but your chains!"

"Well, even before that envelope got opened, just being in the presence, in the company of our sister and brother documentarians, who — who risked their lives making stories, bringing stories to us about hospitals being bombed in Syria, about Brazil, about Macedonia, we were so proud, we are inspired by you guys," Reichert said.

"Our film is from Ohio and China. Go Buckeyes. And — sorry. And — but it really could be from anywhere that people put on a uniform, punch a clock, trying to make their families have a better life. Working people have it harder and harder these days and we believe that things will get better when workers of the world unite," she said to rousing applause from the Hollywood audience.

Jeff Reichert, Julia's husband, went on to thank the cast and crew for their work in the project and to Netflix for providing the film a platform to a large audience.

Former President Barack Obama praised the couple for winning an Oscar since his production company backed the film.

Congrats to Julia and Steven, the filmmakers behind American Factory, for telling such a complex, moving story about the very human consequences of wrenching economic change. Glad to see two talented and downright good people take home the Oscar for Higher Ground’s first release. https://t.co/W4AZ68iWoY