House Democrat Gives the Game Away: 'No Limit to the Number of Times' We Will Try to Impeach Trump 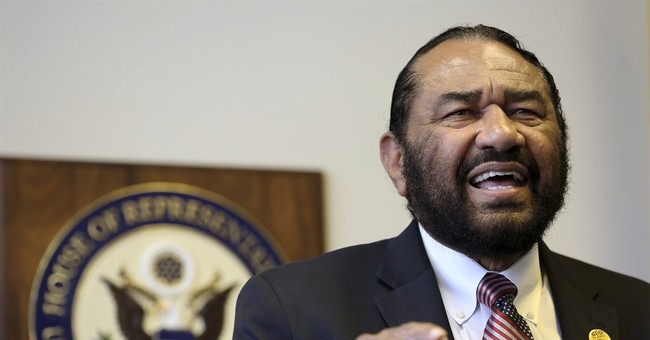 Rep. Al Green (D-TX) said he hopes House Democrats will be able to impeach President Trump on a wide variety of issues because there is no limit to how many times they can impeach a president.

"My hope is that we will expand this and take up additional issues. But I would also say this for your viewers for education purposes, a president can be impeached more than once. So we can do this. We can move forward with what we have on the table currently. We can take this before the Senate and we can still investigate other issues and when the president has committed additional offenses, and my suspicion is that he will, we can take those before the Senate," Green told CSPAN on Thursday.

"There is no limit on the number on the times the Senate can vote to convict or not a president. No limit to the number of times a House can vote to impeach or not a president. So my belief is that the Speaker will probably say we are going to move forward with what we have now, but we are not going to end investigations and that there may be possible opportunities to do other things at a later time."

There has been a debate among House Democrats if they should include other items outside of Trump's phone call with Ukrainian President Volodymyr Zelensky in their articles for impeachment.

Green defended the time and political consumption of impeachment, saying the House of Representatives can pass other bills.

"Now the Senate is not engaged in the impeachment process currently but the Senate is blocking all of this legislation that we’ve sent," he said.