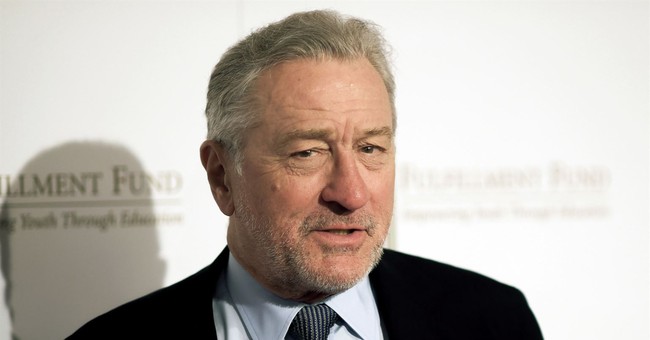 Actor and staunch Trump critic Robert De Niro told late-night host Stephen Colbert that it is "heartbreaking" to see the United States under Trump's leadership and likened it to an "abusive household."

Colbert asked De Niro about people who have gone after mob bosses saying Trump runs his organization and operations like a mob boss.

"How do you think you actually defeat a mobster?" Colbert asked.

"Well, he’s like the Teflon Don, you know, and [Rudy] Giuliani, of all people, the way I understand it, he used the RICO Act to go after gangster families, and, so, it’s unusual that he, now, is representing this Gangster First Family, if you will," De Niro said.

The Racketeer Influenced and Corrupt Organizations Act is often used by federal prosecutors to go after criminal organizations, particularly dealing with racketeering activity.

"To me, it’s more than heartbreaking. It’s a really, really serious situation we’re in. I don’t want to bring people down, but — It’s like a pull around certain things. It’s like living in an abusive household. You don’t know what crazy thing is going to happen next, what’s going to make you say, 'What the hell is going on?'" he continued.

De Niro added Trump is a "fake president" because "he calls everything fake because he knows he’s fake, so he’s projecting."

Weighing in on the Democratic primary, De Niro said he likes former New York City Mayor Michael Bloomberg, as he might be the one to get the country into "calm waters." De Niro also voiced support for South Bend, Indiana Mayor Pete Buttigieg, along with many others. He stressed he would take almost anybody in order "to get past this horrible situation."