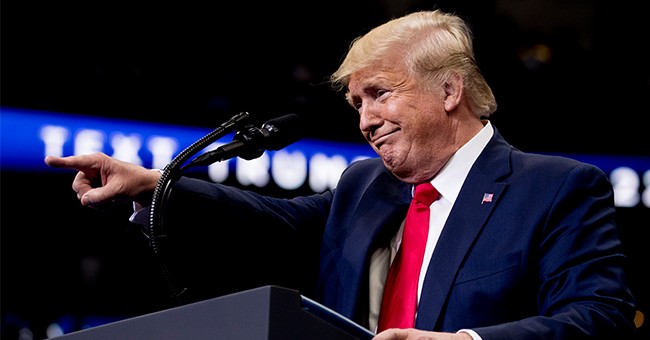 President Trump tweeted Tuesday morning that the terrorist who would have replaced the now-deceased Abu Bakr al-Baghdadi as the leader of ISIS has also been killed by U.S. forces.

"Most likely would have taken the top spot - Now he is also Dead!" Trump said.

Just confirmed that Abu Bakr al-Baghdadi’s number one replacement has been terminated by American troops. Most likely would have taken the top spot - Now he is also Dead!

Al-Baghdadi was killed over the weekend in a raid conducted by U.S. special forces in northern Syria. The serial rapist and murderer was killed when he exploded his suicide vest after being unable to escape. The blast also killed his three children.

No U.S. service member was killed during the raid, but a military working dog was slightly injured in the blast. The dog made a quick recovery and was able to return to active duty.

Trump declassified a photo of the dog in a tweet on Monday.

We have declassified a picture of the wonderful dog (name not declassified) that did such a GREAT JOB in capturing and killing the Leader of ISIS, Abu Bakr al-Baghdadi! pic.twitter.com/PDMx9nZWvw

"[Al-Baghdadi] died after running into a dead-end tunnel, whimpering and crying and screaming all the way. The compound had been cleared by this time with people either surrendering or being shot and killed. Eleven young children were moved out of the house and are uninjured," Trump said in his announcement of al-Baghdadi's death. "The only ones remaining were Baghdadi in the tunnel and he had dragged three of his young children with him. They were led to certain death. He reached the end of the tunnel as our dogs chased him down. He ignited his vest, killing himself and the three children. His body was mutilated by the blast."