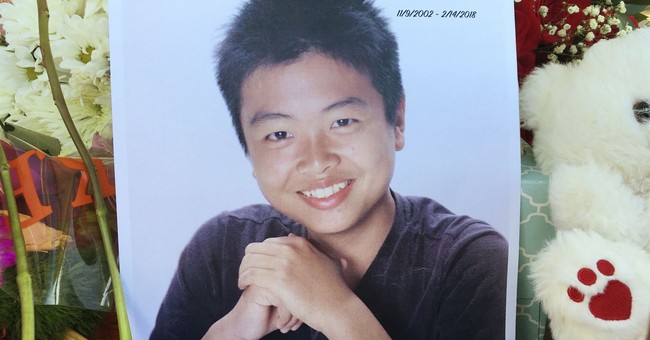 To the students of the Marjory Stoneman Douglas High School who survived the mass shooting in February, Peter Wang is more than a peer. To them, he is a hero.

Wang is among the sixteen others who were killed on Valentines Day, but people who were with him revealed he could have survived had he not instead chose to put himself in harm’s way by holding a door open so others could escape.

His sacrifice “just made perfect sense,” for his character, Peter’s middle school basketball coach, Jason Morris, told the Miami Herald. “He was very selfless. One of those people you couldn’t help but be cheerful around.”

Peter’s act of heroism is the reason why Stoneman Douglas students are now lobbying the White House to award him with the Presidential Medal of Freedom the nation’s highest honor for civilians.

Today, on Thanksgiving, let's cross party lines. Let's join together and sign the below petition to Award the Presidential Medal of Freedom to Parkland Shooting HERO and victim, Peter Wang, who died saving others https://t.co/YDDcXfzqfy

Today, I am thankful for all those who have sacrificed their lives to protect us. Among these heroes is Peter Wang, who was killed defending others on 2/14/2018 at Stoneman Douglas. I believe Peter deserves to receive the Presidential Medal of Freedom. https://t.co/JW5tEunete

“’I’ve had the honor to meet with the President Donald Trump, and it was self-evident from my time with him that he cares immensely about Parkland, the families of the victims, and all my classmates that, by God’s light, were able to walk out safely,” Stoneman Douglas student Kyle Kashuv told Townhall. “Honoring Peter Wang with the Presidential Medal of Freedom would be the ultimate way to honor a fallen hero who, at such a young age, had the courage to risk his own life to save his peers.”

Kashuv said the lobbying campaign is something everyone can get behind:

“It would also be a great way for President Trump to show Parkland that he hasn’t forgotten about us and still stands with us. While the Administration (and myself) disagree with most of Parkland’s position on gun control, this is the ultimate way to transcend party and politics and bring Parkland and this beautiful Nation together as Americans. I know President Trump does care about us. I know he cares deeply. I beg President Trump and his administration to please consider posthumously granting Peter the Medal of Freedom.”

Kasky added that Wang exemplified what it meant to be an American hero.

"This is an absolute no-brainer. Hopefully, this gets in front of the President’s eyes because Peter is a prime example of heroism and I’m proud to have ever shared a school with him. People like Peter Wang make me proud to be an American, and his dedication to his fellow citizens is bound to inspire many.”

A “We the People” petition has been started. It has 2,962 signatures at press time. It needs to reach 100,000 signatures by December 22 in order to get a response from the White House.

Peter’s actions have not gone unnoticed. Since he was part of the school’s Army Junior Reserve Officers’ Training Corps, he and the two other cadets who were killed in the attack were given the Medal of Heroism.

The United States Military Academy also gave Peter an offered admission since it was his dream to attend the school.

“It was an appropriate way for USMA to honor this brave young man. West Point has given
posthumous offers of admissions in very rare instances for those candidates or potential
candidate's whose actions exemplified the tenets of Duty, Honor and Country,” West Point said in a statement.