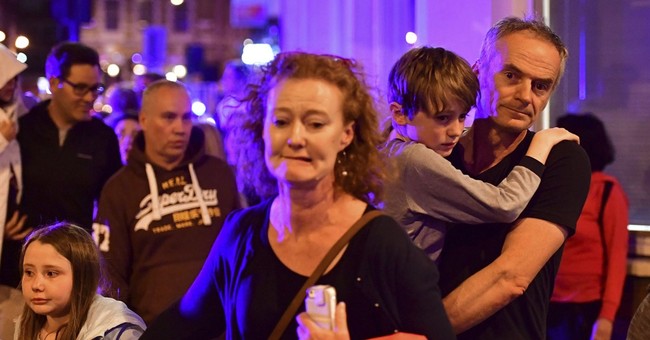 On Saturday night six people were killed and at least 48 people were injured in a terrorist attack in London. The events unfolded in real time, on live TV and on the internet, and now that some hours have gone by, the timeline and some details have become clear.

The attackers drove a white van across London Bridge in an S shape, "veering off the road into the crowds of people who were walking along the pavement" and mowing down "up to 20" people. The vehicle continued to Borough Market, where the attackers exited the van and shouted, "This is for Allah!"

The attackers, wearing fake suicide vests, then went on a rampage through bars and restaurants in Borough Market, stabbing people with 12-inch knives and slashing their throats. Gunshots were also heard in the area, and authorities later confirmed that shots were fired.

Armed police shot and killed the three attackers in the Borough Market area within eight minutes of the initial call.

Six people were killed, and 30 people were taken to London hospitals by ambulance. According to British news and social media posts, there are dozens of "walking wounded" who were being treated a nearby hotel.

The investigation is being headed by the Counter Terrorism Command.

British PM Theresa May said the attack was being investigated as a potential terrorist incident.

Scotland Yard issued a statement that it was treating the attack as a terrorist incident and investigating accordingly.

Police believe they have killed all of the attackers, but an investigation into the network supporting the trio is ongoing.