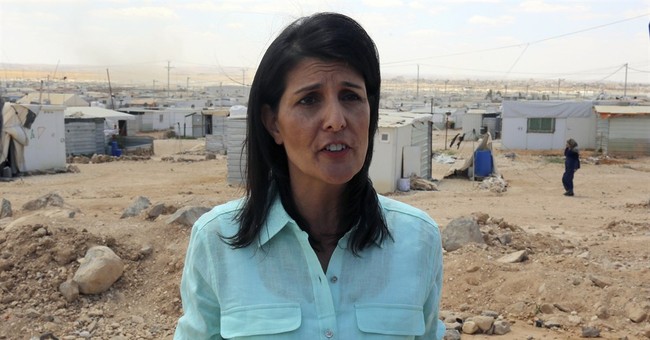 Nikki Haley, US Ambassador to the UN, will appear on Sunday's CNN "State of the Union" with Jake Tapper, talking about the effects of US withdrawal from the Paris climate agreement.

CNN has released a portion of the interview where Tapper asked Haley if she was "willing to acknowledge" that a Trump tweet about global warming is "nonsense."

"The concept of global warming was created by and for the Chinese in order to make U.S. manufacturing non-competitive."

Haley dodged answering the question head-on, saying that Trump knew the "regulations from the Paris agreement were disadvantaging our companies" and how unattainable the regulations are.

Tapper then pressed her, asking, "You're not willing to acknowledge that calling climate change a Chinese hoax is just a big box of crazy?"

Her reply - after multiple administration officials have been unwilling to state Trump's position on climate change:

"President Trump believes the climate is changing, and he believes that pollutants are a part of that equation. So that is the fact.

Just because we got out of a club, doesn't mean that we don't care about the environment."

Haley's reference to the Paris agreement as a "club" is the perfect response to the alarmists.